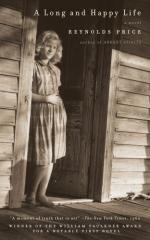 Introduction & Overview of A Long and Happy Life

Reynolds Price
This Study Guide consists of approximately 49 pages of chapter summaries, quotes, character analysis, themes, and more - everything you need to sharpen your knowledge of A Long and Happy Life.

A Long and Happy Life Summary & Study Guide includes comprehensive information and analysis to help you understand the book. This study guide contains the following sections:

This detailed literature summary also contains Bibliography and a Free Quiz on A Long and Happy Life by Reynolds Price.

Upon its first publication in 1962, A Long and Happy Life announced the arrival of a major literary talent. Reynolds Price's first novel, published just a few years after his graduation from college, is a tale told in the southern Gothic tradition, regarding the sorrows of a young woman, Rosacoke Mustian, who tries to find love in an obscure rural town. Her long-term boyfriend, Wesley Beavers, is mysterious to her, showing Rosacoke enough interest to make her feel that they might have a true bond but also flirting with other women and ignoring her to such an extent that she often wonders if he knows her at all. Price tells this story with an exacting eye for detail and a firm control of his characters' emotions as they come to grips with the births and deaths that control the courses of their lives. He creates a very specific geographical location, a countryside where whites and blacks, poor and rich, know each other and live together as neighbors, and where the surrounding forest is still wild enough to raise the sense of wonder in people who have known it all their lives. Since the publication of A Long and Happy Life, Reynolds Price has distinguished himself as a poet, fiction writer, essayist, and playwright. While all of his works have been important to the American literary scene, this novel remains one of his most significant contributions.

More summaries and resources for teaching or studying A Long and Happy Life.

A Long and Happy Life from Gale. ©2005-2006 Thomson Gale, a part of the Thomson Corporation. All rights reserved.