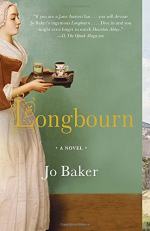 Jo Baker
This Study Guide consists of approximately 121 pages of chapter summaries, quotes, character analysis, themes, and more - everything you need to sharpen your knowledge of Longbourn.

This detailed literature summary also contains Quotes and a Free Quiz on Longbourn by Jo Baker.

Longbourn, by Jo Baker, is the tale of servants of Longbourn House, the home of the Bennet family from Jane Austen's Pride and Predjudice. Housemaid Sarah often dreams of a life outside of servitude or of some kind of interesting change until mysterious new footman James Smith arrives. After a disastrous first encounter, a romance slowly blooms between the pair as James works to protect secrets about his past. Meanwhile,their employers, the Bennet family, are overjoyed to learn that a new bachelor has moved in to a local home and the Militia has set up a camp in the nearby town. Mrs. Bennet gets the idea that she must have have her girls at all of the local parties plus throw a few of her own so that the eligible and respectable men will notice her daughters. Unfortunately, this causes a problem as James' past comes to light and he is forced to become separated from Sarah just as their love is in full swing. After James' departure, Sarah goes through some changes of her own as she leaves Longbourn to become the personal maid for Elizabeth Bennet after she is married to Mr. Darcy. Over time, Sarah becomes so lonely without James that she is forced to make a decision that will hopefully bring James and Sarah back together again.

During laundry chores, young maid Sarah sees a man coming to the house and believes him to be a traveling salesman. She is mistaken however, as it is the newly hired footman James Smith. At first the pair do not get along, first because of cart accident then because of minor arguments. As time goes on, James begins to realize that he has feelings for Sarah, but she is extremely suspicious of James. When the Militia arrives in the neighboring town, James begins to worry that his hidden past will come back to haunt him. He tries everything he can do to ensure that he is not seen. For Sarah, she is initially suspicious of James and his quiet ways. When a new family moves into one of the neighboring estates, Sarah encounters a young black servant who captures her interests. After an argument with Mrs. Hill over the servant, Sarah decides that she will seek Ptolemy out again. She gets her chance when the Bennet family go to Netherfield for a party and the other servants go to bed. She sneaks over to Netherfield and unexpectedly run into Ptolemy. After discussing his dreams for a better life, they share rum and they kiss, leaving Sarah to question her independence.

The next day Ptolemy announces that Netherfield is closing and the inhabitants, including servants are going back to London. he issues an invitation to Sarah to come visit him sometime. Sarah takes this to mean that she is being invited to follow Ptolemy and once again she sneaks out when she thinks everyone is asleep. When she reaches the crossroads, she finds out that she is not alone. James has followed her and he begs her to stay at least until he is sure that Ptolemy cares enough about Sarah to come get her for himself. Overcome with emotions, Sarah kisses James instead and realizes that it was James she has been wanting the whole time. A secret love affair grows out of this and while James is hesitant about letting his guard down at first, he is happily in love with Sarah.

Since the Militia has arrived, more and more social engagements are being given or attended by Mrs. Bennet and her daughters. James tries to make himself scarce during any of these times, but catches the attention of an officer named Mr. Wickham. Mr. Wickham is a suitor of Lydia's but Mr. Wickham has another target. He enjoys talking to Polly and giving her treats and money, but he also has ulterior motives. James catches Mr. Wickham before Mr. Wickham's true intentions can be revealed to Polly. An argument ensues, with James punching Mr. Wickham, who reveals that he knows the truth about James' past and that he is planning on ruining James' life. Before Mr. Wickham can do this, James flees the area in the middle of the night.

Broken hearted, Sarah continues to live and work at Longbourn. After Jane's engagement to Mr. Bingley, Sarah is urged by Mrs. Hill to reconsider Ptolemy's feelings for her as Mrs. Hill is no longer distrustful of him. Sarah does not want to hurt Ptolemy, but she makes it clear that she is no longer in love with him. Sarah continues on at Longbourn until Elizabeth marries Mr. Darcy and the pair bring Sarah to their home. Sarah has an easy life there, but she is still unhappy about missing James. As an unexpected twist, she meets with Ptolemy again but she declines his romantic feelings. Since Ptolemy knows that Sarah will never love him as she loves James, Ptolemy decides to tell her that he has recently seen James alive and well working with a road repair crew. Inspired by this information, she leaves Pemberly to somehow catch up with James. After a great deal of time searching different villages for him, she is finally reunited with him.

The pair adopt a nomadic lifestyle and are constantly moving from place to place. They are happy with this, but they also know they cannot stay in one place as James is still a wanted man. After many years of traveling on the roads, Sarah and James, along with their newborn son, make their way back towards Longbourn. An adult Polly is out hanging the laundry by herself as she looks up to find the couple finally coming home.

More summaries and resources for teaching or studying Longbourn.