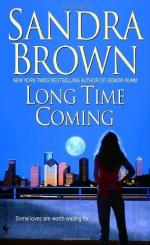 Marnie Hibbs is working in her yard when Law Kincaid arrives. He continues to accuse her of attempting to blackmail him and she continues to argue that she knows nothing about the five letters he's received from her address. He says that the letters are a demand for money and a public acknowledgement of his son or that the fact that he fathered a child will be released to the public. Marnie has just said again that she hasn't written the letters and that she doesn't have a child when a teenage boy rushes into the room and calls her "mom."

Law is an astronaut and Marnie says that's why she recognizes him, but it's not entirely the truth. She also knew Law some seventeen years earlier when the two families spent the summer vacation near each other.