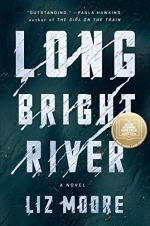 Liz Moore
This Study Guide consists of approximately 75 pages of chapter summaries, quotes, character analysis, themes, and more - everything you need to sharpen your knowledge of Long Bright River.

In Long, Bright River by Liz Moore, Michaela “Mickey” Fitzpatrick has felt responsible for her younger sister Kacey ever since their mother died of a drug overdose. As an adult, Mickey watches as her sister destroys herself taking the same drugs that took their mother’s life. Mickey struggles to save her sister from an epidemic strong enough to pull mothers from their children, as well as a new threat that has emerged. Women addicted to drugs and working as prostitutes in the Kensington area are being murdered. When Mickey, a police officer, investigates these deaths, she comes face-to-face with the reality that not even the police are always honorable.

When the call of a possible overdose death is announced over Mickey’s police radio, her first fear is that it is Kacey. Mickey is relieved that the body she and her new partner, Eddie Lafferty, find does not belong to Kacey. Even though a syringe and tourniquet are next to the body, making it appear the individual overdosed, Mickey sees the blood vessels that have burst in the woman’s face, indicating she died of strangulation, not an overdose. Mickey reports the death as a homicide.

After weeks go by with Mickey’s supervisor, Kevin Ahearn, avoiding Mickey’s questions about the murder, a detective comes to report two other women had been found murdered in Kensington. The detective gives officers a video of a person of interest in the murders. Paula, a woman who works in Mickey’s district, identifies the man as a cop. Mickey reports this tip to Ahearn, but he criticizes her for showing the video to Paula and warns her to concentrate on doing her job.

Meanwhile, Mickey is concerned because her sources in Kensington report that Kacey has been missing for about a month. Mickey contacts her former partner, Truman Dawes, who is on medical leave after being attacked, for help in finding her sister. He helps her locate Connor “Dock” McClatchie, a drug dealer whom Kacey had been dating at one time. After Mickey reports to Ahearn her tip about the murderer being a cop, Mickey is put on probation for breaking protocol. Most of the things she has done wrong have been connected with her search for her sister. When Dock gives Mickey a veiled threat against her son, Thomas, Truman insists that Mickey report her sister to the police as missing. Because of her suspension and her growing lack of trust in the police officers with whom she works, Mickey refuses to make the report at first. Truman finally convinces her to report Kacey’s disappearance to Mike DiPaolo, a detective and friend of his. DiPaolo warns Mickey that even though he understands her concerns, what she has uncovered is beyond her depth.

Mickey and Thomas make their ritual visit to Gee, the grandmother who raised Mickey and Kacey, at Christmas. During the visit, Mickey learns that Kacey broke into Gee’s house, but Gee had not been able to find anything that was missing. Working on the suspicion that Kacey had left something for her to find, Mickey goes upstairs and pulls up the loose floorboard under which she and Kacey left things for one another as children. In this hole, Mickey finds child support checks from their father and holiday cards he had sent to them. Gee had never given them the cards, and they knew nothing about the support checks. The checks and cards are proof that Gee lied about their father being useless and refusing to support them.

Mickey confronts her grandmother about the checks and cards. She asks about Kacey's whereabouts. Gee tells Mickey that Kacey is pregnant. She warns her not to interfere in Kacey’s life, that Mickey already has her baby. A flashback at this point informs the reader that Thomas is actually Kacey’s biological child. Since Kacey was using drugs during that pregnancy, Thomas was born addicted to drugs. He was taken from her by the Department of Child Services at birth. Mickey took custody of the baby. She refused to let Kacey see Thomas because Kacey was never able to pass drug tests. On a whim, Mickey pays a visit to the last address from which her father, Daniel, sent a card. She finds that he still lives there. Kacey is with him, and she is on methadone maintenance for her addiction. She does not want to see Mickey.

That same day, DiPaolo sends a car to watch Thomas and Mickey at home because Paula, Mickey’s source, was found murdered. Mickey goes to Paula’s funeral. Kacey steps in as some of the women at the funeral try to bodily remove Mickey when they realize she is a cop. Kacey does some searching to find out why the women are so angry with Mickey. She discovers that the women believe that it is Mickey’s partner, whom they assume is Truman, who is the one killing the women. Mickey confronts Truman about the rumors even though she does not believe he could be responsible for that sort of violence. This confrontation ruins the relationship between Truman and Mickey. Not only is he not killing women, but he is also helping the people on the streets by passing out clothes and food. Additionally, he keeps doses of Narcan on hand for those who have overdosed.

Mickey calls Kacey about the validity of Kacey’s information. They realize together that the women were talking about Lafferty, not Truman. Kacey realizes that Dock and Lafferty have been working together. She goes against Mickey’s advice to find out if Dock knows Lafferty is the killer. Kacey and Dock lure Lafferty to an abandoned cathedral so that Mickey and DiPaolo can arrest him.