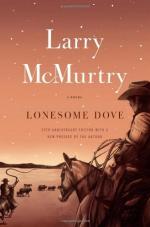 Lonesome Dove is the first-published, but third in chronology, of the four Lonesome Dove novels. Chronologically the novels in the "saga" are as follows: Dead Man's Walk finds Call and Gus joining the Rangers as very young men following, as in Comanche Moon, an erratic commander into a dangerous situation; they are captured by Mexican forces, and literally walk across Texas and New Mexico into Mexico and captivity. Comanche Moon follows, covering several years in the lives of Gus, Call, and the Rangers, and introducing the town of Lonesome Dove; Lonesome Dove finds them after the War Between the States, no longer Rangers, going on one last grand adventure, a cattle drive to Montana. In Streets of Laredo (1993), in which Call alone is the central character, he takes one last adventure before "retiring."