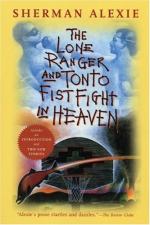 Sherman Alexie
This Study Guide consists of approximately 60 pages of chapter summaries, quotes, character analysis, themes, and more - everything you need to sharpen your knowledge of The Lone Ranger and Tonto Fistfight in Heaven.

Alexie's novel Reservation Blues (1995) solidified his reputation as one of America's strongest writers. Alexie draws on the Faust legend in telling the story of an Indian blues band called Coyote Springs.

N. Scott Momaday's Pulitzer Prize-winning first novel, House Made of Dawn (1968), helped pave the way for other Native-American writers such as Alexie. The novel tells the story of a Tano Indian named Abel who returns from World War II army service to his home in New Mexico. Momaday charts Abel's struggles to reaffirm the ways of his people while living in a world often antagonistic towards those ways.

Megatrends 2000: Ten New Directions for the 1990s (1990), written by John Naisbitt and Patricia Aburdene, provides a social forecast for the 1990s, describing trends and their contexts, including the emergence of free-market socialism, global lifestyles, and cultural nationalism.

More summaries and resources for teaching or studying The Lone Ranger and Tonto Fistfight in Heaven.

The Lone Ranger and Tonto Fistfight in Heaven from Gale. ©2005-2006 Thomson Gale, a part of the Thomson Corporation. All rights reserved.