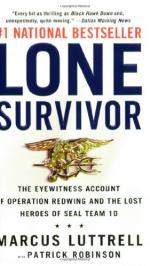 Lone Survivor: The Eyewitness Account of Operation Redwing and the Lost... Summary & Study Guide includes comprehensive information and analysis to help you understand the book. This study guide contains the following sections:

This detailed literature summary also contains Topics for Discussion and a Free Quiz on Lone Survivor: The Eyewitness Account of Operation Redwing and the Lost... by Marcus Luttrell.

Lone Survivor: The Eyewitness Account of Operation Redwing and the Lost Heroes of SEAL Team 10 by Marcus Luttrell tells the harrowing story of a soldier and his team out on a mission in which only one survives.

As the true story opens, Marcus is driving across the country to talk with the families of his fallen comrades about the bravery their loved ones displayed right up to the moment of death. Marcus and his team had been out on a mission to Afghanistan. They were Navy SEALS and very proud of it. Their training was superior, and they were sent to the toughest areas of the world to fight. At that point they were facing Taliban fighters, trying to prevent them from setting up training camps and their own government.

Marcus grew up in Texas with a close-knit family. When he was young, his father taught him and his twin brother how to face the harsh realities of life. He also told them about Navy SEALs. Marcus decided to become one. After some brutal training, he made it. Now he was with other members of the military elite heading into enemy territory, and the mission was tough thanks to the unsteady, mountainous terrain and hoards of Taliban fighters.

Because of political limitations, Marcus and his team let some unarmed Afghan men go free against their better instincts. They came back later with fighters. The Americans fought long and hard, but the four men on the ground were fighting nearly 100 Taliban fighters with no backup. They lost their equipment and were severely wounded. Three of the four of them lost their lives. As a last-ditch effort for survival, one used a cell phone that betrayed their location. A rescue team responded and was shot down with more lives lost.

Marcus was injured and in enemy territory with all his comrades dead. He struggled to find water and get to safety. Afghan villagers found him and decided to give him help and protection. Together they plotted to ward off the Taliban fighters and notify the U.S. military on Marcus' whereabouts. Meanwhile, Marcus' family back in Texas knew he was missing in action. Friends, family, and military members gathered to be with the family, support them, and pray for his survival.

Marcus had several close encounters where Taliban members beat him and tried to hunt him down. The villagers continued protecting him. When rescue finally came, he had been gone for six days. Marcus spent time healing then flew back to the United States where he was reunited with his family. After this, he went back and finished his tour overseas. He took his cross-country trip then worked in Coronado while his body healed.

A brave man, Marcus received an award from President Bush and received it in person in the Oval Office. After healing for a while, he went back to Iraq on another tour.

Lone Survivor: The Eyewitness Account of Operation Redwing and the Lost... from BookRags. (c)2022 BookRags, Inc. All rights reserved.