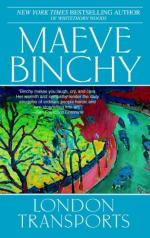 Maeve Binchy
This Study Guide consists of approximately 75 pages of chapter summaries, quotes, character analysis, themes, and more - everything you need to sharpen your knowledge of London Transports.

The setting of the first story in London Transports, Shepherd's Bush is a residential and shopping area to the west of central London. The story's chief character, May, finds it reminiscent of postwar London, certainly not as glittering as Regent Street or the West End, where tourists get their impressions of the city. Many blue-collar Irish have settled there. A magazine has suggested that Shepherd's Bush is a center for abortions, which is what draws the Irish narrator there. Her judgmental friend Celia lives there. Besides Celia's flat in a large Victorian house, May is shown window shopping along Oxford Street and visiting two medical offices and a clinic.

The setting of the second story in London Transports, Holland Park is an affluent residential neighborhood in west central London. Too-perfect Malcolm and Melissa live there and...

More summaries and resources for teaching or studying London Transports.