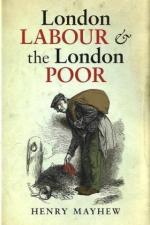 Plot Summary
+Chapters Summary and Analysis
Volume 1: Of the London Street-folk
Volume 2: Of the Street-Jews
Volume 3: Our Street Folk
Volume 4: Those That Will Not Work
Free Quiz
Characters
Objects/Places
Themes
Style
Quotes
Topics for Discussion
Order our London Labour and the London Poor Study Guide

Henry Mayhew
This Study Guide consists of approximately 34 pages of chapter summaries, quotes, character analysis, themes, and more - everything you need to sharpen your knowledge of London Labour and the London Poor.

This detailed literature summary also contains Topics for Discussion and a Free Quiz on London Labour and the London Poor by Henry Mayhew.

London Labour and the London Poor examines at length the various marginalized people one might have encountered on the streets of London during the mid- 1800s. These included street vendors of fruits, flowers, fish, sundries, meals and snacks. Another section details the lives of dustmen, crossing-sweepers, chimney sweeps and mudlarks, youngsters who pick up junk on the side of the river Thames. The book also examines street entertainers, cabdrivers and the homeless, as well as the less reputable members of society including thieves and prostitutes. Somewhat mysteriously, Mayhew also profiles bus drivers and conductors, although they are employees and not independent business people. In each case, Mayhew presents a general profile of the character and background of members of the profession.

Street buyers included those who purchase rabbit skins, umbrellas, used clothes, bottles, scrap metal, paper, rubber and grease, apparently for resale. Finders were those who gathered castoff or unattended merchandise, including animal dung and bones. They also included "hard-ups," individuals who gather cigar butts from the street to dry and resell the tobacco.

Street performers, artists and showmen were divided into groups including puppeteers, acrobats, animal trainers, clowns and other actors. This category also included artists, dancers, musicians, singers, proprietors of games and rides, and those offering entertainments featuring unusual sights like alligators, a horse with two heads or a pig-faced lady.

Street artisans either repaired items in the streets or made them at home and sold them on the street. These items included stockings, nightcaps, dresses for dolls, wooden spoons and leather suspenders. Street laborers included chimney sweeps, lamplighters, shoeshine boys and those who pasted printed advertisements on walls.

The introduction by Victor Neuburg presents a sketchy biography of Henry Mayhew. Relatively little is known of Mayhew's life. The part that is known makes Mayhew sound like a character in a novel by popular Victorian writer Charles Dickens. In fact, some of Mayhew's work may have been read by Dickens and been a source of inspiration for the novelist. Mayhew wrote for newspapers most of his life. His was plagued by financial problems, and even declared bankruptcy. He wrote the articles and pamphlets that later became London Labour and the London Poor purely for financial reasons.

Mayhew's work represents an important turning point in history. For the first time, well-to-do Londoners were interested in learning more about the poor people they saw on the streets every day. However, Mayhew was unable to be entirely objective in his research. The result was uneven, at times empathetic and charitable, at other times condescending and dehumanizing. While Mayhew was a poor sociologist, he was an excellent journalist. His research methods and conclusions leave much to be desired. His concise portrayal of individuals interviewed is clear, effective, impartial yet insightful. Mayhew took pains to accurately report the lives of those he encountered, even when the facts were in direct contrast to his conclusions.

More summaries and resources for teaching or studying London Labour and the London Poor.