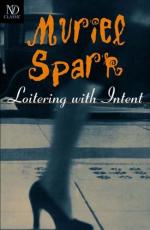 Muriel Spark
This Study Guide consists of approximately 55 pages of chapter summaries, quotes, character analysis, themes, and more - everything you need to sharpen your knowledge of Loitering with Intent.

This detailed literature summary also contains Topics for Discussion and a Free Quiz on Loitering with Intent by Muriel Spark.

Fleur Talbot is a relatively young woman living in London in 1950 when the story begins. She is sitting in an old graveyard, working on a poem, when she is approached by a friendly policeman with whom she chats for a few moments before continuing her work. This event, she states, was the last day of a whole chunk of her life, although she wasn't aware of it at the time. The story then goes back in time ten months where it begins to work forward again, beginning with Fleur's job at the Autobiographical Association, a group of ten adults who have begun to compose their memoirs. Fleur's job is to type out the manuscripts as she corrects them. Her boss, Sir Quentin, takes his work very seriously and warns her that the job must be done in extreme secrecy.

Fleur continues her position at the Autobiographical Association where she befriends the extremely eccentric Lady Edwina, Sir Quentin's mother. Fleur had begun to compose her first novel, Warrender Chase, before beginning her job at the Association, and throughout her employment there, she continued to write and, to her great pleasure, finished the novel and submitted it for publication.

After Fleur's submission of her manuscript, a series of strange occurrences follow that lead Fleur to believe that her manuscript has been stolen and used for purposes for which it was not intended. She soon finds out that her suspicions are correct and that Sir Quentin has not only obtained and read a copy of the manuscript, but has been using passages from it to add to the memoirs of clients at the Autobiographical Association. In addition to this, he has begun to personify the main character of the story, Warrender Chase, and has taken the Association to a different level, seemingly brainwashing the members and providing them hunger-suppressant drugs so that they can lose weight. When the events of Fleur's novel begin to unfold in real life as they had done in the novel, including the suicide of one of the Association's female members, Fleur becomes concerned. She soon learns through a meeting with the publisher who had agreed to publish her book that Sir Quentin had threatened legal action if the book was published, claiming that Fleur had libeled the Association by using them as a basis for her book.

With the assistance of Lady Edwina, Fleur is able to retrieve the original copy of her manuscript and prove to Sir Quentin that she knows what he is up to. Sir Quentin, however, continues in his ways and eventually ends up the same way the character Warrender Chase did in the first chapter of Fleur's novel: dead as the result of a car accident.

The end of the story, however, is a happy one, as Fleur continues her friendship with Lady Edwina, finds another publisher for her book and for her subsequent novels, and begins to enjoy recognition for her work. The story ends the same way it began, with Fleur sitting in the old graveyard in London, working on a poem. She is approached by the friendly policeman, and the reader is filled in on the lives of the remaining members of the Autobiographical Association, having therefore learned the events that marked that "chunk" of her life that she had just finished as she sat there that evening.

More summaries and resources for teaching or studying Loitering with Intent.