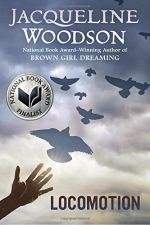 This detailed literature summary also contains Quotes and a Free Quiz on Locomotion by Woodson, Jacqueline.

Lonnie Collins Motion, nicknamed Locomotion, lived with his parents and sister until a fire destroyed their home and killed his parents. His mother was a secretary and his father worked for a power company. He had an excellent relationship with his parents and sister and has memories of happy times with his parents. He also has horrible memories of the fire that killed his parents, but he holds tight to the good memories of his family. Lonnie and his younger sister, Lili, have relatives who say they do not have room to take in the two children. For awhile, church members take care of the children, until there are no more church members willing to take on the task. Lonnie, as a black boy, is not chosen for adoption and spends some time in a group home where the conditions are brutal. Once Lonnie loses track of Lili and no longer has visitors, a rough group of boys identify him as one of the “Throwaway Boys.”

Lonnie becomes a foster son to a woman he identifies as Miss Edna. Miss Edna has two grown sons, one serving in the military and one who moves back home after Lonnie has settled into this new life. Lili settles into the home of a religious woman named Selma. Lili hopes that a profession of faith will earn Lonnie a spot in Selma's home as well, but Lonnie knows that few people are willing to take in black boys, unless they are very young. At his age, Lonnie has little hope of being chosen by anyone other than Miss Edna, and he hopes she does not grow tired of his presence.

Lonnie is making friends at his school. He is upset when a classmate named Eric is diagnosed with sickle-cell anemia. Lonnie loves to write, and he spends a great deal of energy on poetry. One day, another classmate says that black men do not write poetry, which momentarily causes Lonnie to slam his poetry notebook closed. Their teacher, Ms. Marcus, counters, by citing two well-known black poets and saying that rap is a type of poetry. By the time the novel ends, Lonnie is becoming more secure with this stage of his life, including his relationship with Miss Edna's son, Rodney, and his friendships at school.