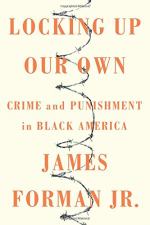 Locking Up Our Own Summary & Study Guide

James Forman Jr.
This Study Guide consists of approximately 41 pages of chapter summaries, quotes, character analysis, themes, and more - everything you need to sharpen your knowledge of Locking Up Our Own.

Locking Up Our Own Summary & Study Guide Description

Locking Up Our Own Summary & Study Guide includes comprehensive information and analysis to help you understand the book. This study guide contains the following sections:

This detailed literature summary also contains Topics for Discussion on Locking Up Our Own by James Forman Jr..

The following version of this book was used to create this study guide: Forman, James (Jr.). Locking Up Our Own: Crime and Punishment in Black America. Farrar, Strauss and Giroux. 2017. First edition.

In his introduction, the author describe how a young black man he was defending was on the receiving end of a familiar speech from a judge fond of citing the values and ideals of activist Dr. Martin Luther King, Jr. in his addresses to clients in similar situations. The author describes his concern that the speech meant that a prison sentence was forthcoming, and then reveals that his concerns were justified: his client was sentenced to an institution that, the author says, was known for its poor environment. The author then uses his consideration of both the larger context of the laws under which his client was sentenced and the socio-political-legal culture of the specific community in which the trial took place (Washington D.C.) as a springboard to introduce the book’s central point of focus. This is to consider and analyze the history of, and motivations for, various aspects of “tough on crime” laws, often initiated and enforced by black lawmakers and often with particularly destructive effects on black individuals and black communities.

Part One considers the origins of “tough on crime laws” from three perspectives that focus primarily on relatively recent history: the mid-1970’s, in the aftermath of both Martin Luther King Jr.’s civil rights activism, and the invasion of heavy drug usage in the 1960’s. This, the author contends, marked the beginnings of the war on drugs (with attempts to curb the use of marijuana, at the time widely held to be a gateway to other, harder, more dangerous drugs) and a war on violence (with attempts to curb the availability and use of guns). The author also considers the emergence of African-American policing, in terms of individual police officers, in terms of some of those officers eventually achieving positions of power and leadership, and in terms of the influence such individuals had, in conjunction with the influence of the communities they policed, on laws and lawmaking. As part of his consideration of history, the author integrates references to, and commentary on, decades of racially-defined lawmaking, at times going all the way back to the American Civil War in the mid-late 1800’s.

Part Two considers the consequences of the decisions and laws developed over the course of events described in Part One. Issues considered here include the passing of what the author describes as “punitive” sentencing laws, and the development of a particularly aggressive form of policing (again defined by determinations to lessen the impact of both drugs and violence within black communities). The author also examines the re-framing of both of these aspects of black experiences within the American legal system as suggestions that a tough-on-crime perspective fits with the goals and ideas of Martin Luther King’s activism.

In an epilogue, the author describes how, in even more recent history (that is: the late years of the Obama presidency in America and the very early days of the Trump presidency), how initially punitive laws and perspectives have become somewhat relaxed. He goes on to suggest, however. that there is still a long way to go before the consequences of what he has defined as the damaging chain of decisions over the past 40 years are fully rectified. In offering hope for a new and different kind of justice system, he describes a case in which a youthful defendant, tried by the same judge who presided over the case described in the prologue, was given an opportunity to reform his life instead of being sent to prison as the laws, strictly interpreted, said he should be. This, the author says, is an example of the kind of laws, tempered with compassion and perspective and context, that should be brought in to replace laws defined more by harshness, absoluteness, and history.

More summaries and resources for teaching or studying Locking Up Our Own.

Locking Up Our Own from BookRags. (c)2022 BookRags, Inc. All rights reserved.