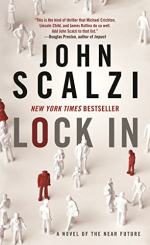 Get Lock In from Amazon.com
View the Study Pack
Study Guide
Order our Lock In Study Guide

John Scalzi
This Study Guide consists of approximately 90 pages of chapter summaries, quotes, character analysis, themes, and more - everything you need to sharpen your knowledge of Lock In.

Lock In Summary & Study Guide includes comprehensive information and analysis to help you understand the book. This study guide contains the following sections:

This detailed literature summary also contains Quotes and a Free Quiz on Lock In by John Scalzi.

"Lock In" by John Scalzi is a story of murder and politics in a futuristic world where a virus has dramatically changed society. The virus, Haden's syndrome, starts out like the flu but over time can leave victims' bodies paralyzed with full functioning minds. These people are dependent on electrical transports and other means of being out in the world. The government has been funding research and aid for these victims, but due to the Abrams-Kettering bill, that will soon change leaving millions of people forced to survive on their own. In the meantime, new FBI agent and fellow Haden Chris Shane and his partner Leslie Vann must solve an intricate murder causing them to take a further look at the web of politics and corporate greed.

Chris Shane's first assignment with the FBI comes on the first day of protesting the Abrams-Kettering bill, aimed at stopping all aid to Haden's syndrome victims and cure research funding. Someone has thrown a love seat out of a seventh story room, but once inside the room they find that a man has been murdered. After a quick argument with the local police, Vann is able to ensure that the case is under FBI jurisdiction as the suspect is a known Integrator, someone who is able to take in the mind of a "locked in" Haden so that the Haden may have use of their body. The suspect, Nicholas Bell, was subdued with a stun gun and arrested prior to Chris and Vann's arrival, but they are able to interrogate him. As Vann questions Nicholas, he has already called his attorney, Samuel Schwartz, to the scene. Upon arrival, Schwarz demands Nicholas' immediate release as he threatens to sue the police department for unlawful detainment.

Chris and Vann investigate the crime scene at FBI headquarters using Chris' digital maps and images of the room along with material from the police department. Among the things they find are a headset that would allow a normal person to use an Integrator. They also find the murder weapon, a large glass shard covered in blood. They also notice from videotape of Nicholas' arrest that he has no blood on his hands and says that he does not know if he did the crime or not. This leads Chris and Vann to question whether or not this is an open and shut case. Shortly afterwards, Chris takes a break from work to search for an apartment closer to the office. After being shown several, he chooses a townhouse filled with other professional Hadens and he is welcomed with open arms by the group.

At a dinner party thrown at the Shane house, Chris runs into Nicholas Bell again, as he is working as an Integrator for Lucas Hubbard. During the dinner, many heated conversations break out about the effects from the Abrams-Kettering Bill. In a private phone call to Vann to update her, Chris finds out that the victim comes from a Navajo reservation. Also, during the dinner, one of the guest's medical companies is destroyed in an explosion supposedly set by a Haden. At the scene of the explosion, Chris and Vann make the discovery that an Integrator caused the explosion using a Haden chemist's security card to gain entry to the building. Upon arriving at the Haden's house, they find that he has been murdered along with a confession tape with both the Integrator and the Haden saying that they wanted to destroy the possible cure for Haden's syndrome.

Chris and Vann's attention gets turned back to the murder at the Watergate Hotel when the victim is identified as John Sani, a Native American who left the Navajo Nation. During the autopsy it is revealed that John has a neural network that makes him capable of being an Integrator. Chris is able to integrate into a personal transport in the Arizona FBI office to meet with Klah Redhouse, who takes him to the Navajo Nation to talk to John's family. While there, Chris learns that at one time John did have Haden's syndrome and that he applied to Window Rock Computational Facility to be a janitor but was mysteriously offered a job as a personal assistant instead. Upon further investigation, Chris finds out that he has been living in California under the name Ollie Green and has been regularly sending money back to his family via money orders. The secret job he had been doing involved John becoming an Integrator and though his investigation Chris finds that John had become unhappy with his employers. Upon trying to investigate John's apartment he is attacked by someone in a black personal transport. Chris discovers that the assailant had been looking for an envelope containing a data card. The data card is a video of John talking about his job and the fear he is losing his ability to remember things while integrated.

A short time later, Vann, Chris, and two of his roommates are set to meet with Brenda Rees, the Integrator Samuel Schwartz has been using. Upon her arrival at a local cafe, Brenda shoots Vann in the shoulder and runs off. Chris chases her to the middle of a street where she detonates a grenade. As she lay dying, she tells Chris that Samuel was not at the Shane mansion party during the entire time. Chris returns to the cafe where Vann warns him that there may be another shooter. Chris immediately returns home, just in time to find someone attempting to kill his physical body. Chris' father manages to shoot and kill the assailant, who is revealed to be Bruce Skow, another Navajo who had accepted a mysterious job offer.

After learning that the Agora is going to be bought by Accelerant Investments, Chris comes up with a plan, as he has figured out that it has been Lucas Hubbard behind all of the crimes. Chris has a meeting with Haden activist Cassandra Bell before her brother Nicholas attempts to kill her. When Nicholas is taken in for questioning, he continues to claim that he wanted to show how evil Cassandra is and how he is against Hadens. During the discussion, the knowledge that Nicholas is really being controlled by Lucas Hubbard is revealed. Nicholas tries to maintain that he really is Nicholas Bell, but after discussing the fact that Lucas's attorney Samuel Schwartz had already given himself up as an accomplice and has told the FBI everything about Lucas' plans to monopolize all markets related to the Haden industry, Lucas finally admits that it is he who has been behind everything all along. He goes on to explain that John Sani had figured out what was going on and was determined to stop him but wound up killing himself before Samuel could take over John's body. With this information, Lucas is sent back to his own body to be arrested for his crimes.

More summaries and resources for teaching or studying Lock In.

Lock In from BookRags. (c)2022 BookRags, Inc. All rights reserved.