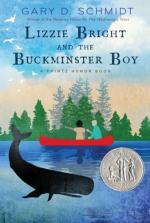 This detailed literature summary also contains Quotes and a Free Quiz on Lizzie Bright and the Buckminster Boy by Gary D. Schmidt.

This novel for young people, inspired by historical events and situations, is the story of how the life of a young white boy is changed by his friendship with a young black (“colored”) girl of the same age. As Turner Buckminster and Lizzie “Bright” Griffin get to know each other, their friendship becomes the trigger for a series of racism-defined confrontations. Meanwhile, as the narrative chronicles these confrontations, it explores themes related to the power of nature, the power of connection, and the tension between freedom and imprisonment.

The story takes place in the early years of the 20th Century in the north-eastern United States, only a couple of decades after the American Civil War which was fought over, among other things, issues of black / white race relations (more specifically: slavery). Lingering tensions from that war fuel the conflict between the conservative white citizens of the coastal town of Phippsburg, Maine and the poverty-stricken “colored” inhabitants of Malaga Island, a small community across the water from Phippsburg.

In the middle of those tensions an unexpected friendship develops between white Turner Buckminster (the son of a new local minister) and “colored” Lizzie Griffin (the granddaughter of a preacher living on Malaga). The relationship begins when the lonely Turner, recently moved from the much more sophisticated and much more populated city of Boston, has his first ever encounter with a “colored” person (Lizzie). He likes Lizzie so much (who, to Turner, seems freer and more natural than anyone else he knows) that he continues to pursue their friendship in spite of the disapproval of both his father and the town, disapproval that manifests in punishment from the former and, from the latter, an increased determination to move Malaga’s inhabitants off the island to make way from a hoped-for tourist resort.

Meanwhile, Turner seems unable to avoid getting into trouble. After a particularly bad misstep, his stern (but occasionally open-minded) father sends him to read to the elderly, angry Mrs. Cobb. Later, after yet another transgression, he is instructed to play the organ for her. Eventually, Turner and Mrs. Cobb develop a grudging friendship, to the point where Mrs. Cobb actually allows Turner to bring Lizzie into her home. At the same time, pressure continues to build on Reverend Buckminster to go along with the intention of powerful and wealthy citizens of the town to destroy the Malaga Island settlement. Bullied by several of the town’s important citizens, the Reverend struggles to keep them happy, while at the same time both disciplining Turner (who keeps breaking the rules and sneaking over to Malaga) and encouraging to continue developing a mind of his own. That development intensifies when, as Turner is trying to find help for an injured Lizzie, he encounters a whale; looks deeply into its eye; and finds himself both changed and curious about the meaning of that change.

Shortly afterwards, Mrs. Cobb dies and leaves her home to Turner. The enraged citizens of Phippsburg try to force Turner to sell the house to them so they can use it for their resort development. Turner, supported (perhaps surprisingly) by his father, refuses, a choice that intensifies the determination of the wealthier members of the town to clear the inhabitants of Malaga Island away. Their determination results in a confrontation between the two communities, which in turn results in Reverend Buckminster’s accidental death and in the members of the Malaga community, including Lizzie, being sent to an asylum for the insane, where Lizzie and many others die.

In the aftermath of Lizzie’s death, Turner feels lost and confused, uncertain about being able to continue to live a life defined by the changes inspired in him by Lizzie. Nevertheless, he is able to take a stand against the members of the community and keep Mrs. Cobb’s house for himself and his family. Finally, another encounter with a whale reinforces his belief that he has done the right thing, and he resolves to share his experience with a former rival who has since become a friend.