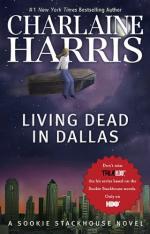 Charlaine Harris
This Study Guide consists of approximately 26 pages of chapter summaries, quotes, character analysis, themes, and more - everything you need to sharpen your knowledge of Living Dead in Dallas.

This detailed literature summary also contains Topics for Discussion and a Free Quiz on Living Dead in Dallas by Charlaine Harris.

Living Dead in Dallas by Charlaine Harris is the second in the Sookie Stackhouse series. In this novel, Sookie finds a dead body in the Merlotte's Bar parking lot, is attacked by a maenad, and is sent to Dallas to use her telepathy to help the Dallas vampires. As Bill's girlfriend, Sookie agreed to help the vampires whenever necessary to read human minds. Her very first job is one in which she is loaned out to the Dallas vampires to help find a missing brother of their nest there. Sookie is nearly raped and murdered in her attempts to help, but she saves the day in her unique, quirky style but nearly loses the vampire she loves in the aftermath. Living Dead in Dallas is laugh out loud funny in a grotesque, mythical way that will leave fans of Charlaine Harris begging for more.

Andy Bellefleur gets drunk in Merlotte's Bar, so Sookie calls his sister Portia to come get him, leaving Andy's car in the parking lot. The following day, when Sookie arrives for work, she finds the car's door partly open. When Sookie goes over to close it, she finds Lafayette, her co-worker, dead in the back seat. The police come and ask Sookie about the last time she saw Lafayette. The only thing Sookie can recall is Lafayette's excitement over a sex club he had recently been invited to attend.

That night, Sookie and Bill drive to Shreveport to speak to Bill's vampire boss, Eric. On the way, Sookie and Bill fight over Bill's tendency to treat Sookie like a kept woman. As they argue, the car breaks down. Bill goes to find help, leaving Sookie sulking in the woods. Sookie encounters a beautiful woman who tells her she wants to send a message to Eric. This message turns out to be a painful beating she gives Sookie across her back. Bill rushes Sookie to Eric's bar where the vampires and a supernatural doctor treat her wounds and remove the poison that would have killed her.

The following day, Sookie learns that she and Bill are to go to Dallas to help the Dallas vampires find a fellow vampire they suspect has been kidnapped. Sookie uses her telepathy to interview several human witnesses, learning that the missing vampire, Farrell, was with a blond vampire no one recognized the night of his disappearance. This leads the vampires to Godfrey, an ancient vampire who is known to desire his own death and who is associated with the anti-vampire group, Fellowship of the Sun. Sookie agrees to go with Hugo, the human lover of a female vampire, to the church where the Fellowship has its headquarters the following afternoon.

Sookie and Hugo go to the Fellowship's church where they meet Steve and Sarah Newlin, the Fellowship leaders. Sookie believes they have the Newlins tricked until they are led into a basement and placed in a holding cell. There Sookie learns Hugo is a traitor to the vampires, having given information to the Fellowship that helped them kidnap Farrell. The guard comes into the cell and moves Hugo to the cell where Farrell is being kept and then attempts to rape Sookie. Sookie manages to hold him off until Godfrey shows up, pulling the guard off her and killing him.

Sookie attempts to convince Godfrey that it is wrong for the Fellowships to force Farrell to commit suicide and to tie Sookie and Hugo to the two dying vampires. Godfrey listens to her argument and agrees to help her escape. Sookie almost makes it out of the church and is nearly caught by a family preparing to attend the lock-in prior to the dawn ceremony. A shapeshifter Sookie recognized earlier by the patterns of her thoughts helps Sookie escape. Sarah Newlin gives chase, causing an accident, but Sookie and the shapeshifter are rescued at the hospital and Sookie is returned to the hotel and Bill.

That night, Sookie and Bill attend a celebration party at the Dallas vampire mansion. During the party, the Fellowship surrounds the house and opens fire with shotguns. Most of the humans in attendance are killed and a few vampires are also killed. Sookie goes in search of Bill and finds him after he has feasted on one of the murderers. This goes against a promise Bill made to her, so Sookie leaves. Over the next few weeks, Sookie learns that Bill is seeing Portia Bellefleur. Later, Sookie realizes Portia has only been spending time with Bill in order to be invited to the sex club Lafayette attended before his death.

Sookie is invited to the sex club and decides to go in order to help clear Andy's name and find out who killed her friend. Sookie takes Eric with her and quickly discovers the culprits. Outside, Andy shows up drunk and tries to force the truth out of the killers at gunpoint. The maenad makes an appearance then and kills the guilty parties and leaves. Bill and Eric clean up the mess, making it appear like an accidental fire. Back at home, Bill and Sookie discuss the Bellefleur family. When Bill hears the name of Portia and Andy's grandmother, he realizes they are direct descendants of one of his four children.

More summaries and resources for teaching or studying Living Dead in Dallas.