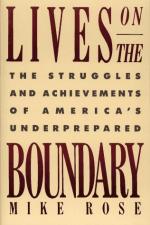 Lives on the Boundary: A Moving Account of the Struggles and Achievements of America's Educationally Unprepared Summary & Study Guide

Mike Rose (educator)
This Study Guide consists of approximately 25 pages of chapter summaries, quotes, character analysis, themes, and more - everything you need to sharpen your knowledge of Lives on the Boundary.

Lives on the Boundary: A Moving Account of the Struggles and Achievements of America's Educationally Unprepared Summary & Study Guide Description

Lives on the Boundary: A Moving Account of the Struggles and Achievements of America's Educationally Unprepared Summary & Study Guide includes comprehensive information and analysis to help you understand the book. This study guide contains the following sections:

This detailed literature summary also contains Topics for Discussion and a Free Quiz on Lives on the Boundary: A Moving Account of the Struggles and Achievements of America's Educationally Unprepared by Mike Rose (educator).

The author, Mike Rose, begins the Preface by stating that LIVES ON THE BOUNDARY is a book of hope for those in the American education system. There are language and cultural barriers and many students and graduates who cannot read and write at an acceptable level. Many of those students are labeled as remedial and relegated to special classes, regardless of why they can't read and write at an acceptable level. This is a label they carry through their many years of school and into the working world.

Many of these students just need someone to understand their problem and spend some time with them to help them overcome their problems. This is especially true of immigrants and people from economically deprived areas. These students need someone to figure out what their problem is and to devise a way to help them work through it. This is what Mike Rose is so successful at doing. He would work with children who were deemed to be remedial, discover their problem, and find a way to help them so their academic performance improved. This required a lot of extra time on his part, time that regular school teachers do not have to give to students on an individual basis.

LIVES ON THE BOUNDARY is the story of the author's experience with the American education system interspersed with stories about his students. His parents were immigrants from Italy who settled in Altoona, Pennsylvania and moved to Los Angeles when Mike was a child. He grew up in the tough area of South Los Angeles. There were few books in his home, but his parents wanted him to have the best education they could afford and sent him to a Catholic high school. Due to a records mixup, he was assigned to the Vocation Education program, which was for remedial students. The error was discovered during his second year and remedied, so he began his junior year in the college prep program. A teacher stimulated his interest in reading and writing and helped him gain admission to Loyola University where he did well due to the special attention of several teachers. Rose qualified for a fellowship at UCLA. After the first year of courses, he tried psychology, found it didn't meet his expectations, and dropped out to join the Teacher's Corps. Here he learned of the special problems of students from disadvantaged backgrounds. He worked with veterans in the Veteran's Program and was able to develop a program to meet their special needs. After this, he managed the Tutorial Center of the Educational Opportunity Program at UCLA.

The EOP was the first opportunity Rose had to work with students who weren't considered marginal. But he discovered that students from the lower classes had problems in college, even if they did well in high school. He was able to determine the problems the students had and devise ways to help them.

Literacy in education is a major issue in America. Even though students from the middle and upper classes also have problems in college, the problem is more acute in those from disadvantaged backgrounds. Rose feels the American education system does not deal well with these problems. It relies too much on assessment testing and ignores the cultural and economic background of the student. Many do not understand what is expected from them if the test directions are just read to them, but if someone explains and shows them what is expected, their performance is much better.

Rose feels he and others succeeded academically, despite their socio-economic background, which indicates there is hope for the educational system. This short book is well worth reading.

More summaries and resources for teaching or studying Lives on the Boundary: A Moving Account of the Struggles and Achievements of America's Educationally Unprepared.

Lives on the Boundary: A Moving Account of the Struggles and Achievements of America's Educationally Unprepared from BookRags. (c)2022 BookRags, Inc. All rights reserved.