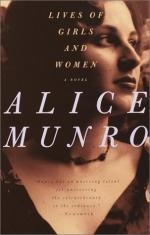 Lives of Girls and Women Summary & Study Guide includes comprehensive information and analysis to help you understand the book. This study guide contains the following sections:

This detailed literature summary also contains Related Titles and a Free Quiz on Lives of Girls and Women by Alice Munro.

This book, rather more a collection of would-be stand-alone stories with a common principal character, invites the reader to witness the life and world of Del, a young girl whose experiences and encounters in growing up form the basis of each "story" or section as she grows from a young girl into womanhood. The reader is compelled to experience the struggle and wonder of growing up that is common amongst all of us, in a story that is peppered with extraordinary circumstances and trials that, thankfully, relatively few of us ever have to experience.

Lives of Girls and Women is a coming-of-age story, full of the tumultuous times one goes through on the road to growing up, the universal truths about growing up and the tragedies that are suffered by far too many of us. More than that, it is the story of place and of the complex relationships that form between those with whom people live and experience life. It is about life itself, in all its beauty and ugliness.

In the first section, "The Flats Road," the reader is first introduced to Del, and her world is brought into intimate focus for the reader. She is a young girl living in the small Prairie town of Jubilee. She lives with her family in a humble home in a section of town called the Flats Road. Del's family, at this stage, consists of her younger brother, her parents and her Uncle Benny (who, she is quick to point out, is "not really [her] uncle.") Benny's marriage has failed, and it is Del's first encounter with a life turned upside down. She begins to question the world around her and looks at her life with a more sceptical eye.

In "Heirs of the Living Body," the second section, Del's world begins to widen. No longer does her universe consist only of her immediate family. In this chapter, Del's place in the world is place in the context of the line of relatives that have come before her, both in her family and in her town. She tries to make sense of her aunts' negative attitudes toward anything other than "daily life," while trying to find her own place within her family, the town and the world at large.

Del's mother, Addie, is the subject of the next section, entitled "Princess Ida." Addie is a door-to-door salesperson of encyclopedias, a job that, for her, is honorable because of the freedom it affords her and because it satisfies her need to explain and categorize the world in a rational fashion. Del and her mother now spend their summers in the town of Jubilee, a place that Del both loves and hates. Del learns of her mother's own humble childhood and is made peripherally aware that her mother is the victim of childhood sexual abuse at the hands of Del's uncle, Bill. Later in the section, Bill pays a visit to Del and Addie, a visit that forever changes the way Del views her town.

The oft-sensitive and complex question of religion is brought into focus in "Age of Faith." In small-town Canada (and indeed in many small towns), the practice of attending church becomes something of a social affair, one that draws the lines between the haves and have-nots. Jubilee is no different in this respect. As Del puts it, "for every person who lived there, the rest of the town was an audience." Anyone who has attended church can relate to this sentiment. All too often, the weekly ritual of attending church focuses more on who is there and what they are wearing than the gathering together of believers in a common faith. Del tries to find her place once again, this time in terms of religion. She attends one church and then another, in search of something that fits and, as Munro writes, enjoying the "theatrical" aspects of religious practice.

In "Changes and Ceremonies," Del begins to experience, for the first time, sexual feelings when she develops a crush on a classmate, Frank Wales. The tragic death of her teacher, Miss Farris, and the events following it serve to underline the phrase that "still waters run deep." All is not what it seems in Jubilee, and even this seemingly mundane place has its dark secrets.

Del meets Art Chamberlain in "Lives of Girls and Women." Art works at the local radio station and is rumored to be having an affair with Fern Dogherty. Del is forever changed as a person in this section, experiencing her first glimpse into a sexual relationship, albeit an inappropriate one.

In "Baptism," Del meets Garnet French, with whom she starts a relationship. In this chapter, she undergoes several kinds of rebirth, or baptism. In the final chapter, "Epilogue: The Photographer," Del is now an adult and has become a writer.

Lives of Girls and Women from BookRags. (c)2022 BookRags, Inc. All rights reserved.