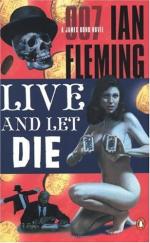 Ian Fleming
This Study Guide consists of approximately 39 pages of chapter summaries, quotes, character analysis, themes, and more - everything you need to sharpen your knowledge of Live and Let Die.

This detailed literature summary also contains Topics for Discussion and a Free Quiz on Live and Let Die by Ian Fleming.

Secret Agent James Bond is on a mission to stop gold coins from being smuggled out of Jamaica. The pirate treasure is being smuggled by a Harlem gangster known as Mr. Big, a man from Haiti who uses voodoo to control a large African American community around the United States. Mr. Big uses the gold to fund SMERSH, the evil Soviet agency that is Bond's arch-nemeses. Bond heads to New York City to work with his old friend, Felix Leiter. While in New York Bond comes face to face with Mr. Big and sees the evil genius in the man's eyes. He also meets Solitaire, a beautiful woman being held captive by Mr. Big. The story then moves to Florida where Leiter is attacked by a shark and nearly dies. Bond discovers Mr. Big's operation and has to head to Jamaica to put a stop to it. In Jamaica Bond covertly enters Mr.Big's private island and is nearly eaten alive by barracudas and sharks. In the last pages of the book the story culminates as Bond saves Solitaire and destroys Mr. Big's yacht.

Bond first learns of the operation when he meets with his boss, M. M tells him gold coins believed to be part of the pirate Bloody Morgan's treasure have been showing up in America. The coins are worth millions of dollars and the money is being used to fund the Soviet agency SMERSH. M believes the coins are being smuggled out of Jamaica into America by an African-American gangster named Mr. Big. The gangster has a yacht on which he often sails between Jamaica and St. Petersburg, Florida. Bond's mission is to first head to America to assist the FBI and the CIA in tracking Mr. Big and trying to uncover how he is smuggling the coins. The operation will then move to the British colony of Jamaica where Bond will take over the investigation.

In New York Bond meets his friend from the CIA, Felix Leiter, who he has worked with in previous operations. Leiter shows Bond around New York and they then head to Harlem to try and get a look at Mr. Big. As they are drinking in one of Mr. Big's night clubs they are suddenly trapped into a secret passage. Bond is taken to Mr. Big's office and the men come face to face. Mr. Big warns Bond to leave the country and stop investigating him. It is here that Bond first meets Solitaire, a woman Mr. Big is holding captive, using her for her telepathic abilities. Bond is immediately attracted to the woman and feels a connection with her. As Bond is leaving New York that night he gets a terrified call from Solitaire as she begs him to help her escape. Bond arranges for her to get away from Mr. Big and she joins him on the long train ride to Florida.

As they are on the train to Florida, Bond and Solitaire are attracted to each other, but before they have time to start a relationship they discover one of Mr. Big's men on the train. They secretly escape the train during the night and head to St. Petersburg on a different train. When they finally reach Leiter at a hotel they learn they escaped just in time as their cabin was shot up by machine guns just after they left. Bond and Leiter leave Solitaire in the hotel as they go to investigate Mr. Big's partner. When they return to the hotel they find Solitaire has been kidnapped by Mr. Big's men. That night Leiter returns to Mr. Big's building and Bond finds him the next day, after he was attacked by a shark and nearly killed. Bond is furious over these developments and goes after Mr. Big's man himself. He enters the building and finds the gold and kills Mr. Big's main man in St. Petersburg.

The scene then switches to Jamaica where Bond trains for the final step of the mission. He will scuba dive under the sea and enter Mr. Big's island. Bond puts an explosive onto Mr. Big's yacht so he can not escape. He is then attacked by barracudas and sharks trained by Mr. Big. He manages to escape death but is caught by Mr. Big. The big man ties Bond and Solitaire to the back of his boat and drags them behind it, intending to kill them. Before they are killed the bomb destroys the boat and kills Mr. Big and his men. Bond and Solitaire are saved and the gold is recovered. The end of the novel sees Bond and Solitaire finally start a romantic relationship.

More summaries and resources for teaching or studying Live and Let Die.