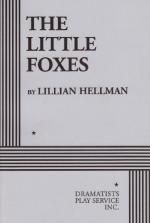 Introduction & Overview of The Little Foxes

Lillian Hellman
This Study Guide consists of approximately 51 pages of chapter summaries, quotes, character analysis, themes, and more - everything you need to sharpen your knowledge of The Little Foxes.

This detailed literature summary also contains Bibliography and a Free Quiz on The Little Foxes by Lillian Hellman.

Lillian Hellman's cynical play of family greed and revenge, The Little Foxes, is her most popular piece of drama, and it is the one most frequently revived. It was acclaimed an instant hit after a hugely successful opening night in 1939, even though drama and literary critics then, as now, disagreed over whether the melodramatic story of the greed-driven Hubbard family succeeds either as a morality play or as a satire. Certainly moral dissembling lies at the heart of the play: the Hubbard siblings steal, deceive, and plot against each other in their efforts to invest in one of the first cotton mills to industrialize the New South, a plan that stands to win them millions of dollars. Regina, temporarily cheated out of her share by her brothers, even "murders" her sick husband by refusing to fetch his medicine when he threatens to obstruct her from taking part in the investment. Their daughter serves as a moral standard who dislikes the family machinations. Unfortunately, Alexandra is too young to defy them. Nor can her Aunt Birdie, who drinks to anesthetize the pain of having married a bully and lost her family's plantation to the rapacious Hubbards. The satiric element of the play consists of its condemnation of the Hubbards's crimes against society. The Hubbards are a family prone to deceit, caught in a cycle of revenge not unlike Greek classical tragedies. The family forbears harvested their merchant profits by overcharging the newly freed slaves, and now the Hubbards will create a larger dynasty on the toil of poor workers, who will flock to the cotton mill for its paltry wages. The play voices Marxist disapproval of the Hubbard form of capitalism.

More summaries and resources for teaching or studying The Little Foxes.

The Little Foxes from Gale. ©2005-2006 Thomson Gale, a part of the Thomson Corporation. All rights reserved.