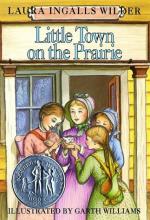 Introduction & Overview of Little House on the Prairie

Laura Ingalls Wilder
This Study Guide consists of approximately 24 pages of chapter summaries, quotes, character analysis, themes, and more - everything you need to sharpen your knowledge of Little House on the Prairie.

Little House on the Prairie Summary & Study Guide includes comprehensive information and analysis to help you understand the book. This study guide contains the following sections:

Laura Ingalls Wilder's Little House on the Prairie is a classic work of children's literature by one of the best-known American children's authors. Published in 1935, Little House, as it is commonly known, is the third in a series of books by Wilder that describe the pioneer experiences of the author and her family as they move from Wisconsin through several western territories and states, before finally settling in what became De Smet, South Dakota. (One book, Farmer Boy, depicts the childhood of Wilder's husband, Almanzo.) While the series is autobiographical, the so-called "Little House" books are considered works of historical fiction as Wilder altered and embellished some aspects of their lives.

Little House is set in the early 1870s, when Charles ("Pa") and Caroline ("Ma") Ingalls took their three young daughters, Mary, Laura, and Carrie, to Indian territory in what is now part of Kansas. The family left Wisconsin, the setting for the first "Little House" book Little House in the Big Woods, because Pa felt the area was becoming too populated and driving out wildlife. Settling on a lonely part of the prairie on the edge of the Osage Diminished Reserve, Pa believed that the federal government would soon open up the land for settlement by whites and push the Indians further west, a prospect he saw no problem with. By getting there ahead of most everyone else, he would have the pick of the land.

In Little House on the Prairie, Wilder tells how she and her family journeyed there and built a life. With the help of the few white neighbors in the area, Pa constructs a house and stable for their horses and digs a well. Wilder describes his process and craftsmanship in detail. After a cattle drive passes through, Pa acquires a cow and calf. To feed and support his family, Pa hunts local game and collects furs. He trades some of his furs for a plow and seeds so he can begin farming in their first full spring in the area. While the days are filled with work just to survive, there are a few moments of happiness, such as when Pa plays his fiddle, when Pa takes his older daughters to the creek and the deserted Indian camp, and when Mr. Edwards brings them Christmas presents from Santa. There are also scary moments as when sometimes-hostile Indians enter the home and take food and supplies and when the whole family falls ill with malaria.

No matter what happens to the Ingalls family, they exhibit a hardy pioneer spirit as they pursue their American dream. They essentially risk their lives for a chance at owning land in virgin territory. Though the several other white settlers in the area aid each other so they can achieve this same goal, Pa and his family have to be essentially self-reliant because these neighbors are several miles away. There is little social interaction outside of the family as well as much uncertainty because of the presence of potentially hostile Indians for significant portions of the year. In the end, however, Pa's gamble does not pay off, and the family leaves before the U.S. government can force them to. At the time, the government decided not to make the Indians leave at this time, but instead make the white settlers move out of Indian territory. The American dream of the Ingalls family has to find another home.

When Little House on the Prairie was originally published in 1935, it was an instant success and has remained in print ever since. Though quintessentially American, the book has been translated into at least forty languages. Despite Wilder's sometimes controversial depiction of Indians and white Americans' negative attitudes toward them, Little House remains an important, influential work of American literature. In Children's Literature Association Quarterly, Charles Frey writes, "In the strength of its writing, the color and variance of its lively incidents, and its deep, deep affection for the life of all being, Little House on the Prairie stands and will stand as writing for children that has few equals and no superiors."

More summaries and resources for teaching or studying Little House on the Prairie.

Little House on the Prairie from BookRags. (c)2022 BookRags, Inc. All rights reserved.