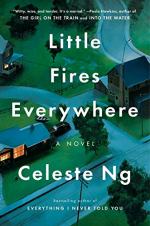 Ng, Celeste
This Study Guide consists of approximately 94 pages of chapter summaries, quotes, character analysis, themes, and more - everything you need to sharpen your knowledge of Little Fires Everywhere.

The following version of this book was used to create this study guide: Ng, Celeste. Little Fires Everywhere. Penguin Press, 2017.

Celeste Ng’s novel Little Fires Everywhere takes place in Shaker Heights, Ohio in the summer of 1997. On a Saturday in May, the Richardson family home was burned down by Izzy Richardson, the youngest of their four teenage children. Her mother, the only family member inside the house when the fires were lit, and her three older siblings- Lexie, Trip, and Moody- watched as their house burned down from across the street. In this moment, the siblings had been too distracted by the fire and their sister’s involvement in it to consider the whereabouts of Mia and Pearl. Mrs. Richardson had yet to tell her children of their departure from the night before, and Moody wondered if his family would ever see Izzy again.

One year earlier, in June of 1996, Mia and Pearl Warren had moved into the top unit of Mrs. Richardson’s rental house. Mrs. Richardson only rented to people in need of her charity, and Mia was a single mother with a gifted daughter in need of a good education They settled in and learned the many rules of living in Shaker Heights. The philosophy behind the suburb was one of planned perfection, and Mia and Pearl, with their nomadic past and eccentric tendencies, were not its typical residents. Moody was the first of the Richardson children to visit the Warrens and develop an interest in their unfamiliar way of life. Pearl and Moody became the best of friends, and although Moody was deeply attracted to Pearl, she developed a strong liking for his older brother, Trip, instead. Lexie also became fascinated by Pearl's timid naïveté, and she pitied her, so she took her shopping and invited her to a Halloween party. To Mia's dissatisfaction, Pearl arrived home from the party past curfew, smelling of smoke and alcohol, and grew cautious of the relationships Pearl was creating with the Richardson children. When Mrs. Richardson offered Mia a new job as their housekeeper, Mia accepted it. Despite Mrs. Richardson’s condescending tone, she took advantage of the oppurtunity to monitor her daughter's whereabouts. While working the new job, Mia met the youngest Richardson child, Izzy, and listened to her story empathically. Izzy had been suspended from school the day before for standing up to her teacher's racist and verbally abusive behavior. Mia asked Izzy a life-changing question: "What are you going to do about it?" (79). Izzy related to and confided in Mia, and after Izzy became Mia's photography assistant, Izzy's demeanor changed for the brighter.

Upon discovering a photograph of Mia and the newborn Pearl hanging up on a wall in an art museum, Pearl and the Richardson children confronted Mia about her past. Mia provided them with limited answers, leaving Pearl to contemplate what her mother had done for them to survive. Izzy became obsessed with the portrait, so she researched the photographer, Pauline Hawthorne, and recruited her own mother- the reporter- to investigate further. This annoyed Mrs. Richardson, as Izzy had a tendency to do.

The week after Thanksgiving, the Richardson family attended a birthday party for baby Mirabelle, who had been left at a fire station and adopted by the McCulloughs a year earlier. The details of the adoption caught Mia's attention, who knew that her co-worker, Bebe Chow, had been desperately looking for her missing daughter, May Ling. Mia was filled with horror at the idea of a mother losing her child, so she called Bebe Chow to inform her. After many futile attempts to get ahold of the McCulloughs, Bebe visited Mia for help. She could not afford a lawyer, so Mia suggested she involve the media. Bebe's story ran on the evening news, thus initiating the battle for her daughter's custody.

Mrs. Richardson learned that Mia was the informant responsible for the case, and she became determined to dig up her past in honor of her dear friend, Linda McCullough. Mrs Richardson learned that Pearl Warren had been born in San Francisco, and she requested a copy of her birth certificate. To Mrs. Richardson's dissatisfaction, Pearl's father had not been listed. However, the certificate did reveal Mia's birthplace from which Mrs. Richardson acquired the location of Mia's parents in Pennsylvania, as well as her real name- Mia Wright.

By February, the flirtatious relationship between Pearl and Trip became romantic while Lexie and her boyfriend, Brian, were also sneaking away to have sex, resulting in Lexie's unplanned pregnancy. Mrs. Richardson announced that she would be traveling to Pennsylvania for work, so Lexie scheduled an abortion for when her mother would be gone. Lexie asked Pearl to accompany her to the clinic. She trusted Pearl not to judge her, but to Pearl's utter dismay, Lexie wrote down the name "Pearl Warren" on the hospital intake forms instead of her own.

Simultaneously in Pennsylvania, Mrs. Richardson was interviewing Mia's parents for a news article she claimed to be writing on their deceased son, Warren. She expertly steered the conversation towards their estranged daughter, Mia, and in doing so, Mrs. Richardson discovered what she had been looking for all along. Mia had sold her womb to another family- the Ryans- but then abandoned her commitment to surrogacy, never to be seen again. Mia was only a teenager when, in order to pay for art school, she agreed to be a surrogate mother for ten thousand dollars, but after her younger brother, Warren, tragically died, and her parents uninvited her to his funeral due to her pregnant condition, Mia fled to San Francisco and gave birth to Pearl as her own. Soon after, the famous photographer and Mia's dear mentor, Pauline Hawthorne, died of cancer, but only after shooting her last series of photographs- the portraits of Mia cuddling and nursing Pearl, together and in love. In the eyes of Mrs. Richardson, however, Pearl's father was Joseph Ryan, and her legal mother was Madeline Ryan. She had discovered Mia's secret, a secret she could use against her for infiltrating Linda McCullough's newborn maternal utopia.

After the abortion, Lexie stayed with Mia and Pearl, and unexpectedly, became enlightened by Mia's genuine kindness. Lexie had previously been on the side of the McCulloughs, but whilst in Mia's maternal presence, she started to see things differently. Lexie witnessed a phone call between Mia and Bebe Chow, which inspired a conversation about Bebe and Mia's point of view. The custody hearing began in April of 1997 and it lasted for weeks. The courtroom heard a painful and complicated exchange of arguments between the two sides, one focusing on Bebe's lack of resources and the other, the McCullough's insensitivity to the baby's Chinese heritage. As baby Mirabelle's fate was being decided, relationships in Shaker Heights had started to crumble. Mr. Richardson felt guilty about his role in the trial; Moody had caught Pearl in her lies about Trip; and Lexie and Brian had broken up. Mrs. Richardson sought more dirt on Bebe Chow along the false accusation Linda McCullough had produced that Bebe appeared to be pregnant with a second child, and possibly had aborted it. While snooping through medical records, Mrs. Richardson was shocked to read the name "Pearl Warren" on a list of patients who had recently received an abortion, and she assumed that the father was her own son, Moody.

Meanwhile, it was finally decided that the McCullough's would remain Mirabelle's legal parents, and Bebe Chow no longer had any rights to see her own child. Confused by these results, Izzy sought out Mia for emotional support, to which Mia offered Izzy an analogy. She explained that when people's lives were destroyed, they started over, like after a prairie fire.

On a Thursday night, Mrs. Richardson confronted a very moody Moody about Pearl's supposed 'abortion', but Moody spitefully enlightened his mother of Pearl's sexual relationship with her other son, Trip. Izzy overheard their conversation, and she felt Pearl ought to know what her mother and brother had said about her. On the next Friday morning, Mrs. Richardson found herself driving to her rental house. She entered without knocking and berated Mia on her past, her hypocrisy, and Pearl's subsequent lack of morals, and then evicted Mia from the house to be gone by the next day. On that Friday afternoon, Mia retrieved Pearl from school early and informed her of the news. Pearl was devastated, and she refused to leave without a proper explanation. Mia sat Pearl down and told her every part, along with the details of her past and Mrs. Richardson's surprising eviction. Comforted by her mother's honesty, Pearl understood and continued to help her mother pack. Izzy stopped by in search of Pearl, but Mia turned her away after reminding her of the prairie fires as a way to say goodbye. On that Friday night, as Mia and Pearl departed for good, Bebe Chow was across town stealing May Ling back from the unsuspecting McCulloughs' and flying her back to China. Izzy confronted both Moody and Lexie on their involvement in the rumors and deduced that it was Lexie who had been pregnant after all. She ran back to the rental house only to find the lights were off and they had already gone. Mia left behind only an envelope of photographs, so Izzy took the one she knew belonged to her. Repulsed by her family's selfishness and determined to begin anew, Izzy concocted a plan with Mia's words in mind.

On a Saturday morning in May, while thinking nobody was home, Izzy lit a small fire in the middle of each bed of her house and ran away from her family in search of Mia and Pearl. Mrs. Richardson discovered the flames and exited the house, but she instinctively knew Izzy was to blame. One by the one, each of Izzy's siblings returned to their house to watch it burn. Lexie, Trip, and Moody did not know of Mia and Pearl's departure from the night before, so they were shocked to hear their mother explain they would be staying in the rental house while they rebuilt. Inside the rental house, they discovered the envelope of portraits, one for each Richardson, left behind by Mia as gifts. Mrs. Richardson portrait depicted a single gold feather at the bottom of a birdcage, an image that haunted her as she would search for her daughter every day thereafter.