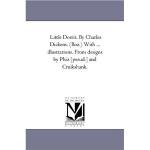 Charles Dickens
This Study Guide consists of approximately 43 pages of chapter summaries, quotes, character analysis, themes, and more - everything you need to sharpen your knowledge of Little Dorrit.

This detailed literature summary also contains Topics for Discussion and a Free Quiz on Little Dorrit by Charles Dickens.

Little Dorrit, by Charles Dickens, is the story of Amy Dorrit, a kind and compassionate young woman who is born impoverished and becomes wealthy, but retains her goodness and strength of character throughout.

Amy, often called Little Dorrit because of her small stature, is modest and giving, and often taken for granted by her siblings and her father. She is the rock of the family throughout their years in Marshalsea Prison, and through her hard work and diligence, creates a home of comfort and love. As she is growing up in the prison, Amy gathers devoted friends of all types, and becomes known for her good heart.

William Dorrit, Amy's father, has been in the debtors' prison for so many years he is finally promoted to manage the place. William has always fancied himself a gentleman wronged, and behaves as if the tips he receives from released prisoners are the result of their high regard for him. His daughter Fanny has found work as an actress, and his son Tip finds difficulty being employed. Amy works behind the scenes to ensure her brother and sister have opportunities.

Arthur Clennam has returned to England from a twenty year stint in China, working with his father. He has come home to confront his mother and ask her to reveal a secret he knows exists in their family. Mrs. Clennam rebuffs his attempts and Arthur turns the family business over to a longtime family servant, Jeremiah Flintwinch. It is at the home of his mother that Arthur first sees Amy Dorrit, and becomes intrigued by her.

Rigaud, a murderer and prison escapee, has changed his name to Blandois and comes to England to seek a new fortune. He begins inserting himself into the Clennam household through a contrived friendship with Jeremiah Flintwinch.

Through Arthur's friendship with Mr. Meagles, he meets and becomes business partners with Daniel Doyce. The two men battle with the Office of Circumlocution in order to bring Daniel's inventions to the service of the public. Arthur begins to fancy Minnie Meagles, the daughter of his friend, but she is in love with Henry Gowan, and eventually marries him.

Arthur's investigative tendencies and compassion for Little Dorrit lead him to hire Pancks to explore the source of William Dorrit's debts. Pancks discovers that not only did Dorrit not owe anyone money, he has a vast inheritance waiting to be claimed.

When the Dorrit family becomes wealthy, everyone changes except Amy. Fanny becomes a debutante immersed in society, and Tip becomes a fine gentleman. Amy prefers to be alone, and thinks fondly of the days when she and her father would sit by the fire in the prison quarters.

The Dorrit family head to Italy. There they find Minnie Meagles and her artist husband Henry Gowan, and the fabulously wealthy and powerful Merdles. Mrs. Merdle is in Rome, where she spends her summers while Mr. Merdle, the famous banker, is in England. William Dorrit is thrilled to be introduced to the Merdle family and when Fanny catches the eye of Sparkler, Mrs. Merdle's son, Dorrit encourages a marriage. When Dorrit makes a trip back to England, he meets with Mr. Merdle and gives the banker control of the Dorrit money. Arthur and Pancks also invest in Merdle's company, as Merdle is hailed as the greatest economic mind of England.

Amy does not go to balls or participate in any of the refining activities her father expects of her. Amy is now considered to be holding back the family with her behavior, and the days at Marshalsea are quickly forgotten. Only Frederick, William's brother and part of the entourage, sees her value and character.

Soon after Fanny is married, William becomes very ill and dies. Frederick dies soon after, and Tip becomes ill. Amy nurses her brother back to health. In England, Merdle commits suicide and it is revealed that his company was a scam. All people who invested are ruined.

Arthur has lost everything and is now living at Marshalsea. His health is failing, he feels very old and useless. Rigaud's plot to blackmail the Clennam family is rapidly coming to fruition.

Amy finds out about Arthur and rushes to his side, acknowledging that she has always loved him. Arthur gets better, and is surprised to learn of her love. He realizes he has loved her all these years as well.

Mrs. Clennam rushes to the prison and gets Amy to help her confront Rigaud, but as the two women approach the Clennam house, it explodes, killing the villain. Meagles and Daniel come up with the funds to release Arthur from prison. That night, Arthur and Amy are married.

More summaries and resources for teaching or studying Little Dorrit.