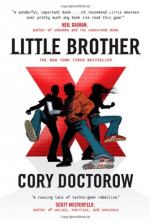 Cory Doctorow
This Study Guide consists of approximately 47 pages of chapter summaries, quotes, character analysis, themes, and more - everything you need to sharpen your knowledge of Little Brother.

This detailed literature summary also contains Topics for Discussion and a Free Quiz on Little Brother by Cory Doctorow.

The novel Little Brother by Cary Doctorow tells the story of a teen who takes on the Department of Homeland Security and wins. Marcus Yallow starts his campaign against the DHS after he is arrested, questioned, and tortured without good cause for nearly a week in connection with a terrorist attack on San Francisco. Themes such as invasion of privacy, American rights, loyalty, and standing up for what one believes in are dealt with in this engrossing story. Marcus learns that he, as an American citizen, is responsible and able to stand up to the leaders and protectors of the country when they do not uphold the rights up which the country was built.

Marcus and three of his best friends skip out of school one day to play their favorite game, Harajuku Fun Madness. As they search for a clue in the game, terrorists strike the city, blowing up the Bay Bridge. Darryl is stabbed as the four friends try to catch a subway back home. Trying to get help for his friend, Marcus flags down a military jeep. Instead of helping, the people in the Jeep shackle and place hoods on the heads of the four friends. They are held for questioning for nearly a week before Marcus, Vanessa and Jolu are released to go home. Darryl is not released with them and no one will give them any information about their friend.

Back at home, Marcus finds a bug in his homemade computer and realizes the DHS is spying on him. He uses an Xbox game station and Paranoid Xbox software to create an Internet connection that the DHS can not track. Marcus distributes Paranoid Xbox discs and encourages his friends to use the secure connection. Soon, teens all over America are using this Internet connection to share information about the illegal activities of the DHS. As Marcus becomes more active in his plan to uncover the activities of the DHS, his two closest friends, Vanessa and Jolu turn their backs on him. He meets a girl, Ange, who supports and helps Marcus in his cause. As Marcus and Ange try to get the word out about what the DHS is doing to the country, their efforts seem to always be twisted out of context so that they work against them.

After a fight with Ange, Marcus bumps into a strange man named Zeb who gives Marcus a note telling him that Darryl is still alive and still being held captive. Depressed and discouraged, Marcus' mother catches Marcus crying. He breaks down and tells her what has happened to him. They turn the story over to an investigative reporter who breaks the story just after a large number of teens have been arrested in a VampMob in San Francisco's Civic Center. Marcus had set up the VampMob as a cover for himself, Ange and another girl to go underground. When he and Ange are separated and he fears she has been arrested, Marcus decides to stay and fight. Marcus is arrested again by the DHS but not before he gets a picture of the four teens together just before the terrorist attacks, proof that Darryl was not killed in the terrorist attacks, as well as a video showing a government leader telling the DHS he knew when and where the next terrorist attacks would take place but planned not to do anything about them because it would help get his man re-elected. Treasure Island - an abandoned military base in the San Francisco Bay where Ange, Darryl, Marcus, and dozens of other DHS prisoners are being held - is stormed by troopers from the California Highway Patrol just as Marcus is being waterboarded in an attempt to gather information from him. As a result of Marcus' fight, the DHS is thrown out of the state of California. Many members of the DHS are arrested as a result of their actions. Marcus is convicted only of a charge of misdemeanor theft.

More summaries and resources for teaching or studying Little Brother.