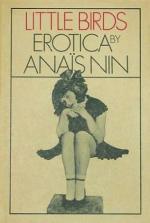 Anaïs Nin
This Study Guide consists of approximately 22 pages of chapter summaries, quotes, character analysis, themes, and more - everything you need to sharpen your knowledge of Little Birds.

Mary is lovely but is unable to attach to anyone emotionally. She has spent part of her live sleeping with men when short on money and then even went to work in a whorehouse. Mary's husband won't be able to recover from these stories. Mary sleeps with men and women alike caring nothing for any of them. Mandra cares for Mary but Mary is unable to attach herself.

Mandra goes to a party and meets Miriam. Miriam isn't as inviting as Mary but is enticing none the less. Miriam is with Paul but keeps kissing Mandra on the lips every time Paul isn't looking.

Mandra seems to find a connection between Miriam and Mary although much of the statements that Mandra makes explains the differences between the two. Much of what they seem to have in common is the fact that...

(read more from the Mandra Summary)