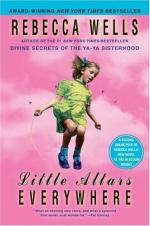 Rebecca Wells
This Study Guide consists of approximately 46 pages of chapter summaries, quotes, character analysis, themes, and more - everything you need to sharpen your knowledge of Little Altars Everywhere.

Little Alters Everywhere is the hilarious, poignant, tragic, compassionate multi-layered saga of the turbulent Walker family in Thornton, Louisiana from the 1960s to the present. Different facets of the story are revealed gradually. Siddalee Walker's mother Viviane is a witty, bright, cultured drunk. She is also viciously abusive to her children. Sidda's father Shepley Walker is immature but a hardworking farmer who hides out at the duck camp whenever things are not going his way. When Big Shep leaves, the children are at the mercy of their mother, who beats them with a belt until their legs bleed.

Still, there are idyllic scenes when Mama and her girlfriends, the Ya-Yas, take all the children to Spring Creek, the summer retreat. There, without the fathers around, everyone swims, reads and just relaxes. Viviane's own mother Buggy is mentally unstable and as selfish as her daughter. The narrative focuses on eldest daughter Siddalee Walker, who is the major target of her mother's alcoholic rage.

The great tragedy of Viviane's life was the death of her first son, Siddalee's twin brother, when he was just a few days old. Viviane or "Vivi" as her friends call her, also abuses prescription drugs. When Shepley Walker accuses his wife of being a drunk and an unfit mother, she moves out of their bedroom permanently. Viviane begins fondling all of her children in bed at night, especially her eldest son Little Shep.

Shepley Walker is struggling with his own problems including a mountain of inherited debt, which he hides from his wife and family. When he is appointed to the draft board, Big Shep finds that he must send scores of young men, many of them the sons of friends, to die in Vietnam. Whenever the combined weight of these problems becomes too great, Big Shep flees to his duck camp, leaving his children at their mother's mercy.

Viviane turns to religion after the break in her marriage. One night, she returns from a retreat in a vicious mood, from not having had a drink or any drugs for three days. Later that evening, she takes all four of her naked children outside and brutally beats then with a belt, until they legs are raw. The family's faithful maid. Willetta, intercedes and forces Mrs. Walker to stop. Despite this abusive, chaotic and sometimes charming childhood, the four Walker children grow to be productive adults, although each is scarred in his or her own way.

Siddalee is on Xanax for anxiety. She is a theater director based in New York who seldom returns home to see her family. Little Shep is perhaps the most damaged by Viviane's sexual abuse, although he buries his feelings and shows it the least. Still, his relationship with his own wife and children is profoundly affected because Little Shep does not trust himself to be close to anyone. He also drinks behind his wife's back. Lulu shoplifts constantly as a teen and has a problem with overeating. Baylor, the youngest, overcompensates by becoming an attorney, although he wrestles with private demons. His three children, including baby Lee, are the light of his life.

When Siddalee finally returns home for baby Lee's baptism, she finds her mother unchanged. Still, Sidda manages to see her mother as a funny, troubled, witty woman who did the best she could. Sidda is then able to forgive her mother, finding her own peace in the process.