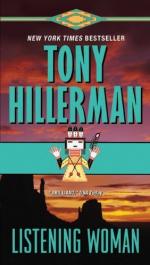 Tony Hillerman
This Study Guide consists of approximately 27 pages of chapter summaries, quotes, character analysis, themes, and more - everything you need to sharpen your knowledge of Listening Woman.

This detailed literature summary also contains Topics for Discussion and a Free Quiz on Listening Woman by Tony Hillerman.

Hosteen Tso is an elderly Navajo who has asked for the services of Margaret Cigaret, also known as the Listening Woman, or Blind Eyes. Margaret is now at the hogan of Hosteen Tso, where she is conducting a "reading" to determine which of the traditional Navajo "sings" will be required by Tso. At one point, Tso tells her that he has seen sacrificial sand paintings desecrated, but doesn't tell her where this occurred, saying that it is a secret. He also says that he had accidentally killed a frog - an event that could be the cause of Tso's illness. The Listening Woman, accompanied by her niece, Anna Atcitty, goes a short distance from Tso's hogan where she listens for instruction regarding what "sings" must be performed to restore Hosteen Tso to health, but sees a vision of darkness engulfing Tso. By the time she returns to the hut, both Tso and Anna have been murdered.

Meanwhile, police are searching for a helicopter that flew into Navajo country from a Santa Fe robbery and disappeared. There are some reported sightings, but the money and helicopter seem to have vanished. When Navajo police officer Joe Leaphorn is facing an assignment to oversee a Boy Scout retreat, he asks instead to be allowed to work on the cases of the missing helicopter and the Atcitty/Tso murders. Added to this is Leaphorn's desire to find the man who almost ran over him during what would otherwise have been a routine traffic stop on Navajo Highway One.

As Leaphorn searches for pieces to all the puzzles, he finds that there are relationships and order that bring all the cases to a single conclusion. Leaphorn learns the man who tried to run over him is James Tso, that he's been under FBI surveillance, is likely involved in the Santa Fe robbery, and is a member of the Buffalo Society - an offshoot of the American Indian Movement. Leaphorn also learns that James is holed up in a cave known to his grandfather as being home to sacred drawings and that is the reason for James's decision to murder his grandfather.

When a group of Boy Scouts go missing, Leaphorn soon realizes that James Tso is involved, as is his brother, a priest named Benjamin, though Benjamin is on the side of right. The situation concludes with Leaphorn rescuing the Scouts, though Benjamin falls victim to a gunshot wound in his efforts to help Leaphorn. Knowing that an explosion is imminent, Leaphorn manages to get the Scouts to safety, then throws the bag of ransom money into the cave, knowing that the white men will dig out the money, though they might never have excavated the cave in order to gain access to the sacred drawings.

More summaries and resources for teaching or studying Listening Woman.