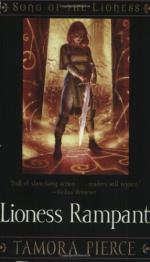 Tamora Pierce
This Study Guide consists of approximately 49 pages of chapter summaries, quotes, character analysis, themes, and more - everything you need to sharpen your knowledge of Lioness Rampant.

Alanna of Trebond is a woman and she is a knight. Having finally attained her lifelong goal of becoming the first woman knight - errant, she is now unsure what to do with herself. Since all that Alanna has ever wanted was knighthood, now that she has it she finds herself left empty and purposeless.

Despite her uncertainty about her future, a new challenge does present itself. Alanna has found an ancient and strange map. The map reveals the location of a great treasure. The Dominion Jewel is a great magical tool that only a ruler can use. In the hands of her old friend Jonathan, Alanna is sure that the Dominion Jewel would bring wealth and happiness to the lands of Tortall.

Alanna must face many challenges on her quest for the Dominion Jewel. She must face bandits. She must face and rogue assassins sent to kill her by old enemies in far off lands. She must face the god-like creature living at Chitral, and his fierce winter storms. She must even face up against her own companions and friends.

After surviving all of these trials and returning to Tortall with the coveted Dominion Jewel, everything seems initially well for Alanna. Is it? Alanna returns to court to find that her brother, a powerful sorcerer, has returned her arch-enemy, Duke Roger, from the dead. Alanna's brother grows weaker and weaker, yet Roger seems to become stronger and stronger, and rumor has it that the gods have turned their backs on Tortall as punishment. With great enemies roaming the capital unchecked and unidentified and with a dark rebellion growing in secret, will Jonathan's reign really be as cursed and short-lived as the rumors say?

More summaries and resources for teaching or studying Lioness Rampant.