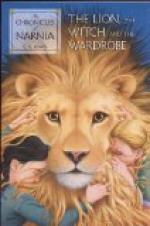 The Lion, the Witch and the Wardrobe Characters

C. S. Lewis
This Study Guide consists of approximately 41 pages of chapter summaries, quotes, character analysis, themes, and more - everything you need to sharpen your knowledge of The Lion, the Witch and the Wardrobe.

This character is the youngest of the four children who make up the quartet of central characters in the novel. She is the first to find her way into Narnia, the most excited about being there, the most enthusiastic visitor, and is both the softest hearted and the strongest willed. For example, when Mr. Tumnus tells her what he’s been asked to do by the evil White Witch, she simultaneously comforts him and displays a determination to not be taken prisoner. In the same way, she refuses to be manipulated into recanting her story about Narnia when challenged and doubted by her brothers and sister.

This character is the third oldest of the four children who visit Narnia. He is the second to find his way into the magical land, but has a very different experience from that of his younger sister. Where she finds a...

More summaries and resources for teaching or studying The Lion, the Witch and the Wardrobe.

The Lion, the Witch and the Wardrobe from BookRags. (c)2022 BookRags, Inc. All rights reserved.