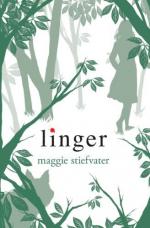 Maggie Stiefvater
This Study Guide consists of approximately 33 pages of chapter summaries, quotes, character analysis, themes, and more - everything you need to sharpen your knowledge of Linger.

This detailed literature summary also contains Topics for Discussion and a Free Quiz on Linger by Maggie Stiefvater.

Sam Roth is an eighteen-year-old werewolf. As the story opens, Sam is trying to come to terms with the fact that he's no longer a werewolf. He continually tries to remind himself that he must "believe in the cure." He'd been infected with bacterial meningitis which had apparently cured him of the "werewolfism." Sam's girlfriend is Grace Brisbane. Grace was bitten by the werewolves as a child but never turned. Sam has a brutal history and was raised by the wolf that infected him, Beck. Beck no longer takes a human form at all. Grace and Sam are happy together and still learning to trust in their love.

Sam has taken over for Beck as leader of the pack when the wolves are in their human form. Beck, believing that Sam would not be in his human form, had created new wolves, including Victor and Cole. Cole is a well-known singer who had been caught up in drugs and sex. He had made it to stardom but realized that he was miserably unhappy. When Beck explained to him about becoming a werewolf, Cole had jumped at the opportunity. However, he was apparently at least somewhat apprehensive and he convinced his best friend and band member, Victor, to join him. Victor is unhappy as a wolf from the beginning. Cole wants to be a wolf in order to forget himself and to escape his unhappiness. But when Victor is shot, Cole realizes that he has been completely self-centered. He is incredibly guilty over the loss and begins to bond with Sam, Grace and Isabel, a teenage girl whose brother had died trying to be cured of werewolfism.

Meanwhile, Grace's parents discover that Grace and Sam are sleeping together and forbid Grace from seeing Sam. Grace rebels, gathers a few clothes and goes to Sam's house. They both know that her time is limited and that it has something to do with the wolves, but don't know how to fix it. Cole, the son of a scientist, has come to believe that his own inability to remain in wolf form had to do with the drugs he'd taken. Isabel demands that he work on Grace's problem and he comes to the conclusion that she's dying because she never changed into a wolf, just as the wolves who stop changing to humans have only a few years to live. Cole re-infects Grace and she changes immediately. Sam is torn, wanting to be re-infected as well so that he can be with Grace but knowing that he now has the responsibility of finding a permanent cure for them all.

More summaries and resources for teaching or studying Linger.