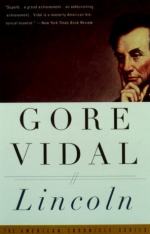 Gore Vidal
This Study Guide consists of approximately 80 pages of chapter summaries, quotes, character analysis, themes, and more - everything you need to sharpen your knowledge of Lincoln.

This detailed literature summary also contains Topics for Discussion and a Free Quiz on Lincoln by Gore Vidal.

Lincoln is an historical novel by Gore Vidal, covering the time of Abraham Lincoln's troubled presidency, 1861-1864. It follows the course of political and military battles from his arrival in Washington, D.C., through his assassination. The ending, by his secretary, argues in hindsight that Lincoln is the greatest American president, who offers himself as atonement to the nation.

Marked for assassination as President-elect, Lincoln must sneak into Washington, DC, incognito, on 23 Feb. 1861. He assembles a diverse Cabinet including political rivals William H. Seward at the State Department and Salmon P. Chase at the Treasury Department. Also vying for power are the Cooke brothers and the Blairs, whose "Old Gentleman" father longs for a return to power as in the Age of Jackson. Chase and Seward are both preparing for White House runs for 1864. When Fort Sumter falls shortly after his inauguration, Lincoln calls up the militia and suspends the writ of habeas corpus to keep Maryland in the Union and avoid Washington being cut off. A young pharmacist, David Herold, joins the vast rebel spy ring watching the White House.

Chase talks to bankers to finance the war, but nothing goes right on the battlefield. To restore the White House's lost elegance, Mrs. Lincoln incurs enormous debt and is connected to the sale of Lincoln's secret message to Congress to the press. She marks completion of the renovation by a controversial party, soon after which she loses her son Willie, and with his death, she loses her mind.

A succession of generals try and fail; Congress authorizes a military draft that causes rioting in New York City, and Lincoln prepares to free Southern slaves as a military necessity. The 1862 elections reduce the Republican majority, and the party looks for an alternative candidate in 1864. A few appear. Kate Chase marries rich William Sprague to fund her father's campaign without knowing that Sprague is involved in smuggling. Chase's political chances dim, however, and Sherman's victory at Atlanta ensures Lincoln's reelection. Lincoln reluctantly names Chase as Chief Justice of the Supreme Court. Lincoln meets politely with Confederate commissioners but concludes that the war must run its course. It does, shortly before Inauguration Day.

At the second inaugural, John Wilkes Booth fails to shoot Lincoln but is so upset by his speech that on 14 April 1865, he fires a fatal shot into Lincoln's skull at Ford's Theater. Recalling these events to a historian in Paris, Lincoln's secretary John Hay declares that Lincoln is America's finest president, who wants to die as atonement for the terrible things he does to the nation.