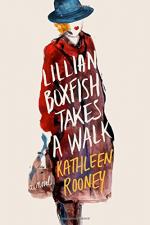 Kathleen Rooney
This Study Guide consists of approximately 37 pages of chapter summaries, quotes, character analysis, themes, and more - everything you need to sharpen your knowledge of Lillian Boxfish Takes a Walk.

This detailed literature summary also contains Quotes and a Free Quiz on Lillian Boxfish Takes a Walk by Kathleen Rooney.

The following version of this book was used to create this study guide: Rooney. Kathleen. Lillian Boxfish Takes a Walk. St. Martin’s Press, 2017.

The novel’s present is New Year's Eve, 1984. Lillian Boxfish reminisces about aunt Sadie, her childhood idol in New York City.The illustrated cards and poems Sadie sends Lillian are the inspiration for the smart and witty advertisements Lillian writes for R.H. Macy’s as an adult.

In her New York City apartment, Lillian talks to her son, Gian, who lives in Maine, on the phone. Gian and his children have just been to visit Lillian, but Gian tells her that his stepmother, Julia, has had a heart attack and is unlikely to survive. Gian again asks his mother if she will move to Maine, but Lillian again refuses to leave her New York apartment. Lillian then dresses to eat New Year’s Eve dinner at her favorite Italian restaurant, although she fears she has spoiled her appetite by eating too many Oreos. Lillian thinks of the 1930s when she was the highest paid advertising woman in the United States.

Throughout the novel, the narrative shifts back and forth in time while staying in the present tense.

The narrative shifts to the 1930s. Soon after an article came out describing Lillian as the highest paid woman in American advertising, she asks her boss at R.H. Macy’s, Chester, to be paid the same amount as her male coworkers. Chester refuses, citing these men’s families as the reason they needed to make money. Lillian’s colleague and rival Olive agrees that Lillian should be grateful with what the company is already paying her.

In 1984, Lillian heads to her neighborhood bar to get a drink before dinner. She speaks with the bartender and drinks a Negroni. She knows she will never return to the bar because they have installed a television on the wall, but she nevertheless leaves the sympathetic bartender a big tip.

Lillian recalls 1932, when she visits the publisher of her first poetry collection. Her editor wants to change the name of the collection, but Lillian refuses. The collection – still with its original title – sells well, and Lillian goes on to publish several more books of poetry.

In the present, Lillian leaves the bar and heads to the restaurant, Grimaldi’s. She recalls a time a few years ago when she was asked to have a meal at a soup kitchen. She then thinks of the 1920s, when she was just starting out in New York, and living with her lifelong friend, Helen. The pair were dating two men, but they were more interested in building careers in the big city than in getting married. Lillian and Helen earn enough money in their positions at R.H. Macy’s to move out of the Christian Women’s Hotel into their own shared apartment. Too busy with her work, Lillian breaks up with her boyfriend, Dickie, who wrongly assumes she will beg to have him back.

At Grimaldi’s, Lillian learns that the longtime proprietor, Alberto, is planning to leave New York for Palm Beach. After having a drink there, Lillian decides to eat at Delmonico’s steakhouse, the place where she and her ex-husband Max discussed the details of their divorce in 1955. Back then, Max was planning on marrying Julia, the woman with whom he had cheated on Lillian. During that lunch, the former couple also discussed the custody arrangement for their son, Gian.

Walking to Delmonico’s, Lillian thinks of her newly-made friend, Wendy, a twenty-something photographer who has invited Lillian to her New Year’s Eve party. Lillian recalls a party she held at her own apartment in 1933. There, her coworker Olive suggests that Lillian, too, wants a wedding, children, and a suburban home. Lillian, who often spoke out against love, strongly disagrees with Olive, and the feud between the two women outwardly begins. On her way to the restaurant in 1984, Lillian meets Skip, a limousine driver who offers her a ride that she refuses. Lillian recalls falling in love with Max, a rug salesman at Macy’s in 1935, and marrying him soon after. That year, Lillian worries about her reputation as a formerly single woman who criticized love.

In 1984, Delmonico’s is packed and Lillian cannot find a table. A kind family asks her to join their party, and Lillian’s faith in humanity is revived. After leaving the restaurant with the intention of attending Wendy’s party, Lillian thinks of her going-away party at Macy’s in 1942, when she was pregnant with Gian. She knows her thriving career is over, and soon after, she is left alone with the baby when her husband is drafted into World War II. In the present day, she encounters a night watchman near the East River, with whom she discusses limericks. She then recalls the idyllic honeymoon cruise she and Max took to Italy.

Near St. Vincent’s hospital, Lillian helps a pregnant woman, Maritza, in the hospital lobby. She then thinks of her own stay at a sanitarium in the 1950s and the electroshock treatments that eased her out of her depression. During her stay at the sanitarium, her husband Max asked if she could travel to Reno to expedite their divorce. In 1984, Lillian stops to buy snacks and an amaryllis bud for Wendy and meets the shop owner’s son, C.J., who talks to her about his troubles. She then recalls one time she felt degraded and demeaned by two younger copywriters on a local talk show. Later on New Year's Eve, she arrives at Wendy’s party, where she sees many fashionably-dressed young people and meets Wendy’s “husband,” a gay man who is her best friend and roommate.

Leaving the party, Lillian recalls the event that got her committed in the first place: her attempted suicide on a cruise with Max. In 1984, she is confronted by three streetwise boys who ask her for money, and having none, take her fur coat. In fact, she “trades” the coat for one of their jackets. Near her house, Lillian again runs into Skip, the limousine driver. He follows her home in his limousine, and the pair make plans to take a walk together in the near future. In her apartment, Lillian feeds her cat, Phoebe, before listening to the messages left on her answering machine.

More summaries and resources for teaching or studying Lillian Boxfish Takes a Walk.