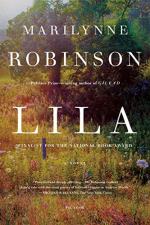 Marilynne Robinson
This Study Guide consists of approximately 47 pages of chapter summaries, quotes, character analysis, themes, and more - everything you need to sharpen your knowledge of Lila.

This detailed literature summary also contains Quotes and a Free Quiz on Lila by Marilynne Robinson.

Marilynne Robinson's "Lila" is the story of a young woman who, abandoned at a home for migrant workers, was kidnapped at a young age and cared for by Doll. Though her life is challenging, Lila finds herself in Gilead where she is befriended and married by Reverend John Ames. As the narrative alternates between the past and present, Lila's experiences as a child are shown as influences on her present through her inability to trust her husband, her constant thoughts of leaving him, and the shame she feels about herself and her life.

As a child, Lila lives in a Midwestern migrant workers home where she is neglected until Doll kidnaps her and flees to the cabin of an old woman where they live for a month before falling in with Doane and Marcelle's crew. Their life is rough and includes few joys while food and other necessities are often lacking. When times get hard, Doll considers returning Lila to her original dwelling, but since she is gone for four days, Doane abandons Lila. Doll retrieves her, but Lila cannot trust anyone ever again. At one point, Doll and Lila live in Tammany IA where Lila goes to school. Doll returns to Lila after killing one of her kin, possibly Lila's father, but she is arrested. Doll escapes, but she is presumed dead.

After Doll's death, Lila seeks help at a woman's house in St. Louis, and this establishment is a brothel where Lila accumulates even more shame. Because she is unattractive, Lila's career in the brothel is short-lived, and she gains employment as a hotel housekeeper for a several years before catching a ride to IA with a young religious woman. She finds an abandoned cabin in the woods where she settles in, and Lila begins working on neighboring farms to collect bus money. When she decides to explore the nearby town, Gilead, one day, she ducks into the church to escape the rain and meets Reverend John Ames.

A timid friendship blossoms between Reverend Ames and Lila who are attracted to one another's loneliness. Lila tends his garden as well as the graves of his first wife and child who died in childbirth. Lila thinks about leaving Gilead, but she is repeatedly drawn back to Reverend Ames and suggests he should marry her one day. Reverend Ames baptizes Lila, and a month later, they are married. Their intimacy is timid and fraught with loneliness as they are both haunted by their pasts. Lila learns about religion and begins to develop her faith, and she also begins learning to trust her husband, though she repeatedly denies being able to trust him. Lila still considers fleeing Gilead in a perverse desire to abandon him before he learns her past and asks her to go.

After Lila learns she is pregnant, she worries about how her past will impact her child, even as she is comforted by the qualities he'll inherit from his father. When Lila goes to the abandoned cabin and tries to care for a runaway boy, her husband is terrified, thinking she is unhappy and plans to leave him. Lila's happiness is tempered by her fear of abandonment, loneliness and distrust, yet after her son is born, Lila finds peace in motherhood. Although Lila considers the possibility of leaving Gilead with Robby after the Reverend's death, she decides against subjecting her husband to the new hurt of willful abandonment. Lila and the Reverend find comfort in their mutual loneliness and find an uneasy peace.

More summaries and resources for teaching or studying Lila.