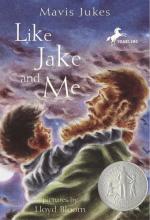 Mavis Jukes
This Study Guide consists of approximately 11 pages of chapter summaries, quotes, character analysis, themes, and more - everything you need to sharpen your knowledge of Like Jake and Me.

Like Jake and Me Summary & Study Guide includes comprehensive information and analysis to help you understand the book. This study guide contains the following sections:

This detailed literature summary also contains Topics for Discussion on Like Jake and Me by Mavis Jukes.

Like Jake and Me is a picture book for young children by author Mavis Jukes. This book is about a young boy whose mother has remarried and is expecting twins. Alex is a small boy who feels as though he has little in common with his stepfather, Jake. However, while helping Jake find and dispose of a spider that frightens him, Alex discovers that everyone has fears and that even strong, confident Jake occasionally needs someone's help. Like Jake and Me is a sweet story of self discovery.

Alex is watching his stepfather cut up wood for the fireplace when his mother comes out to join him. Alex's mother is expecting twins and therefore has a huge belly that makes it nearly impossible for her to bend over. Alex helps her pick up some change she spilled as they watch Jake together. Virginia, his mother, then asks if he thinks a bottle she placed over two pear blossoms that now contains two perfectly formed pears are ready for picking. Virginia wants to fill the bottle with pear nectar and trick her sister into attempting to figure out how the pears got inside the tiny mouth of the bottle.

Alex asks his mother about the twins, wondering if they will be like him, a little boy who enjoys ballet, or tough like Jake. Virginia suggests they might be like both of them. Alex then goes to help Jake bring in the wood. As Jake stacks the wood, Alex sees a wolf spider on his neck. Alex talks to Jake about it, but Jake thinks they are talking about Virginia. When Alex finally explains that he is talking about a wolf spider on Jake's neck, Jack panics and begins tearing off his clothing. Alex searches each piece of clothing as Jake takes it off, but he cannot find the spider. Soon Jake is standing naked on the front porch, still panicking over the missing spider. Virginia joins them and finds the situation amusing.

Alex explains the situation to Virginia and she spots the spider in Jake's hat. Jake swings Alex up into his arms to thank him and they dance. Virginia says she can feel that babies dancing inside of her and Alex realizes that the twins are just like both he and Jake.

More summaries and resources for teaching or studying Like Jake and Me.

Like Jake and Me from BookRags. (c)2022 BookRags, Inc. All rights reserved.