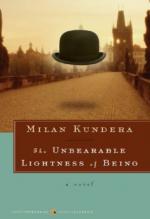 The Unbearable Lightness of Being - Part 5, Chapters 17-23 Summary & Analysis

Milan Kundera
This Study Guide consists of approximately 87 pages of chapter summaries, quotes, character analysis, themes, and more - everything you need to sharpen your knowledge of The Unbearable Lightness of Being.

Tomas begins to think that he may be 'on holiday' for too long. He has been window washing for three years and thinks it is time to move on. He meets a woman in the street whom he has had before, but cannot place her and realizes that he is physically and mentally tired.

During a trip to the spa, where all of the Czech names were replaced by Russian names, Tomas is asked medical advice. He thinks that it was a mistake for him to leave Zurich and come back to Prague. He is furious with Tereza. They do not speak, until Tereza has a bad dream that involves her suffering from Tomas's infidelity. He holds her, as she cries.

Tomas attends a funeral for a biologist friend. There, he sees the editor and goes to talk with...

More summaries and resources for teaching or studying The Unbearable Lightness of Being.

The Unbearable Lightness of Being from Gale. ©2005-2006 Thomson Gale, a part of the Thomson Corporation. All rights reserved.