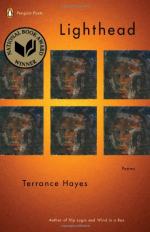 This detailed literature summary also contains Quotes and a Free Quiz on Lighthead by Terrance Hayes.

The following version of this book was used to create this study guide: Hayes, Terrance. Lighthead. Penguin Books, 2010.

Lighthead is a collection of poems divided into four sections. The collection as a whole does not follow a linear narrative, however there are many recurring concepts, speakers, and narratives that thematically tie the poems together. The book begins with an introductory poem entitled “Lighthead’s Guide to the Galaxy” introduces the recurring character of Lighthead, a figure of near mythic proportions who seems to have something to say about everything. This first poem is more or less an ars poetica that establishes some of the themes that are later introduced in the book, and offers to the reader several definitions of poetry and art as a lens through which to interpret the collection.

The first section, “Last Train to Africa” features poems that are largely occupied with issues surrounding race and racism in the United States. A poem like “All the Way Live” tells the story of two black men who are put on trial for vandalizing a statue of Robert E. Lee, and another poem, “A Plate of Bones,” describes the tensions that build when a black father meets his daughter’s white boyfriend. Meanwhile, the long-lasting effects of segregation and intergenerational strife appear in poems such as “The Golden Shovel,” “New Folk,” and “Three Measures of Time.”

The next section, “God is an American,” focuses more on the cultural aspects of being a person of color in America. Prominent historical African American figures appear in several of the poems throughout this section, such as Harriet Tubman in “The Avocado” and Marvin Gaye in “A Form of Sexual Healing.” Some less prominent historical characters come into play as well, such as the subject of the poem “Anchorhead,” an unnamed slave being transported from Africa to the American colonies on a slave ship. Poems in this section such as “Nothing” and “God is an American” also address the concept of language as an incomplete method of expression and the things that actually exist in what one might view as an empty space.

The third section, “Coffin for Head of State,” begins with a second poem featuring Lighthead as a speaker, entitled “Lighthead’s Guide to Addiction.” This poem serves as an introduction to the rest of the section, which further explores themes of cultural history and self-expression. Several more historical figures make appearances in this section as Hayes continues to inform his own art through the works of his artistic predecessors. “Satchmo Returns to New Orleans” is an ode to Louis Armstrong, while “Coffin for Head of State” is addressed to Nigerian musician Fela Kuti.

The final section, “Cocktails with Orpheus,” represents much more of a departure from the previous sections. While it still engages with many cultural topics and themes, the poems in this section have a much more personal tone as Hayes seems to draw more and more from his own personal experiences in these works. His absent father, Earthell, appears in multiple poems in this section, most notably in “Arbor and Butch,” which describes the emotional impact that their first meeting had on the poet. In addition to familial conflict, also addressed in the third Lighthead poem, “Lighthead’s Guide to Parenting,” this section also features several poems that are occupied with anxieties regarding mortality and the desire to transcend time. The poem “Cocktails with Orpheus” addresses this theme most directly, as the speaker of the poem learns from Orpheus that he was actually able to retrieve his beloved from the underworld and break the cycle of life and death.

The collection is punctuated with a final poem that stands alone after the fourth section, entitled “Airhead.” This poem is one of, if not the shortest in the entire book, and tells the story of a prophet who attempts to forewarn and emperor of his impending troubles, only for the emperor to have him beheaded. The prophet, however, does not die as a result of his beheading, and lives on untethered to his corporeal form.