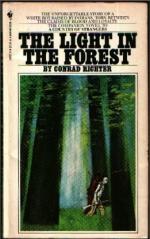 The Light in the Forest Quotes

Conrad Richter
This Study Guide consists of approximately 49 pages of chapter summaries, quotes, character analysis, themes, and more - everything you need to sharpen your knowledge of The Light in the Forest.

"They hated to give them up all right. But they hated worse to see a white man's town a settin' there on the banks of their own river...They were scared we were takin' over the country. So they started fetchin' in their white relations." Chapter 2, p. 12

"So that's why they're so pale and bandy-legged," he nodded, "having to eat such old and stringy leather while Indian people have rich venison and bear meat." Chapter 3, p. 23

"Tell him I will bear my disgrace like an Indian and will wait to strike till the time is in my favor." Chapter 4, p. 34

"He says the Susquehanna and all the water flowing into it belongs to his Indian people. He says his Indian father lived on its banks to the...

More summaries and resources for teaching or studying The Light in the Forest.

The Light in the Forest from BookRags. (c)2020 BookRags, Inc. All rights reserved.