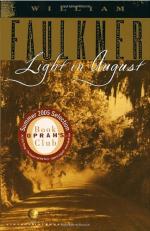 This detailed literature summary also contains Related Titles and a Free Quiz on Light in August by William Faulkner.

Light in August is a classic novel written by a master storyteller. William Faulkner's writings are often meditative in nature, and Light in August is a powerful but grim meditation on racism, religious intolerance, and the plight of women in Depression-era Mississippi. Faulkner brings these themes to life through the characters of Lena Grove and Byron Bunch. Lena is a disadvantaged but determined young woman, who sets out to find the wayward father of her soon-to-be-born babe. Instead of the father, shiftless Lucas Burch, she is directed to Byron Bunch, a co-worker of Burch's with a similar name. This mistake proves to her benefit, as Byron quickly falls in love with her and is willing to give her the home and security which the child's father fails to provide.

The heart of the story, however, focuses on another co-worker of Burch and Bunch, named Joe Christmas. Christmas has been a social outcast since birth due to his mixed bloodline. In the racist south, a man of mixed parentage is shunned by blacks and whites alike. Raised to be a racist, Christmas is unwilling to reconcile himself to his dual heritage. He considers himself an abomination and freak, and behaves self-destructively to prove it.

Christmas' story intertwines with Lena and Byron's because of Christmas' business relationship with Lucas Burch. Burch, who takes the name Joe Brown in order to avoid Lena, becomes Christmas' partner in an illegal whiskey-selling enterprise which is headquartered on Miss Joanna Burden's property. Miss Burden is also a social outcast in the small town of Jefferson, Mississippi because of her family's abolitionist leanings. The aging spinster embarks on a torrid and obsessive love affair with Christmas, and gives him and his partner the use of a cabin on the back of her property. She, like Christmas, is internally conflicted. Her strict religious upbringing forbids sex outside of marriage, yet she is simultaneously desperate to make up for lost time with Christmas. When she begins to pray for Christmas to turn around his life and commit to their relationship, this pushes Christmas away from her. Her need to finally create a loving, stable home conflicts drastically with his inner demons, which drive him to throw away his life out of spite for all the people who've hurt him.

The lovers' quarrel results in homicide. Christmas kills Miss Burden, narrowly averting the bullet she had planned for him. This act effectively ends the whiskey business with Joe Brown, and Brown is so upset to have lost his easy money supply that he sets the Burden house afire with the corpse inside, hoping to cover up his partner's crime. However, once it is announced that there is a reward for the capture of Miss Burden's murderer, Brown quickly sells out Christmas to the local law enforcement.

Christmas' grandparents arrive from nearby Mottstown with the tragic story of how the grandfather had killed Christmas' father, allowed his mother to die in childbirth, and then had stolen the mixed breed baby away from his loving grandmother. The grandmother appeals to Byron Bunch, and together they attempt to save Christmas' life with the help of Byron's friend, former reverend Hightower. Christmas escapes police custody and seeks sanctuary at Hightower's, but a militant citizen takes the law into his own hands and guns down Christmas in Hightower's kitchen.

Meanwhile, Lena's arrival in town has thwarted Brown's plan to get the reward money. He would rather skip town and leave the money behind than be forced to do the right thing and marry Lena. Fortunately for Lena, Byron Bunch is ready and willing to step into the breach left by Brown. Lena and Byron leave town together as the novel ends, seeking a new beginning for their little family.