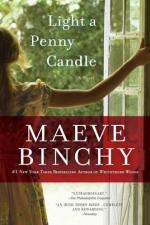 Maeve Binchy
This Study Guide consists of approximately 76 pages of chapter summaries, quotes, character analysis, themes, and more - everything you need to sharpen your knowledge of Light a Penny Candle.

This detailed literature summary also contains Topics for Discussion and a Free Quiz on Light a Penny Candle by Maeve Binchy.

Maeve Bincy's Light a Penny Candle follows two families, one English and the other Irish, through a period of twenty years (1940-1960). The families are first entwined when Elizabeth White, at age ten, is sent to Kilgarret, Ireland, to escape the German bombing of London and is adopted for five years by the O'Connors, whose daughter Aisling is also ten. Linked only by letters for most of the novel, as they mature and each find tragedy in love, Elizabeth and Aisling are reunited towards the end in London where, both widowed, they resolve to begin life again together.

The White family in 1940 sends sheltered ten-year-old only daughter Elizabeth from London to safety in Ireland in care of Violet White's school mate, Eileen O'Connor. Over five years, Elizabeth grows into an integral part of the boisterous clan. Tragedy strikes when her foster brother, Sean O'Connor, dies fighting in the British Army.

Elizabeth returns home to the aftermath of war, tries to explain her experiences, and finds it hard to cope with being parted from her Irish family. Violet divorces George, from whom she has long been emotionally estranged, and moves in with Harry Elton. Elizabeth is thrust into a conflict beyond her years and tries to help morose George, despite the fact that he cares only for himself. As Violet suffers schizophrenia, Elizabeth is drawn surprisingly to her resented stepfather's side. She is also drawn into the field of art and finds a narcissistic lover, Johnny Stone, whose baby she aborts without telling him, fearing she'd lose him otherwise.

Elizabeth makes a triumphal return to Kilgarret for Aisling's wedding, but the marriage proves a disaster because of Aisling's husband Tony's heavy drinking and impotency. Elizabeth tires of Johnny and marries seemingly safe lawyer Henry Mason. After a period of bliss and hope they begin quarreling, as Henry shares George's obsessive views on career. Elizabeth and Aisling are reunited in London when Aisling flees a beating by her husband.

When word comes that Eileen is near death, Elizabeth and her baby accompany Aisling to Kilgarret. Tony then dies in a sanitarium, leaving Aisling a wealthy widow, but Johnny, who has become Aisling's lover in place of Elizabeth, refuses to marry her. Aisling moves on to Henry's law partner, Simon Burke. Elizabeth's ten-year-old abortion comes public in the worst possible way, leading to Henry's accidental death under the influence of alcohol. Elizabeth and Aisling vow to start life over together.

More summaries and resources for teaching or studying Light a Penny Candle.