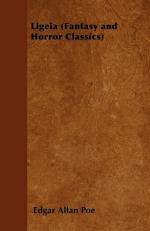 Edgar Allan Poe
This Study Guide consists of approximately 18 pages of chapter summaries, quotes, character analysis, themes, and more - everything you need to sharpen your knowledge of Ligeia.

The narrator of Ligeia is not unreliable in the sense that he is criminally-minded or insane, but he is somewhat obsessed with his beloved Ligeia, which puts much of what he says into question. He also admits, after her death, that he was often high on opium, which also lends his voice an air of unreliability. Unlike in other tales, however, this narrator's reliability is not so much an issue as the tale that Poe is telling is more about the love between the narrator and Ligeia, and the effects of that love, than on the actual action.

When the narrator is married to Ligeia, they live "near the Rhine," indicating a residence in Germany. After her death, much of the action moves to England - specifically, to a bridal chamber in the narrator's new home, a chamber he shares with his second wife Rowena...

More summaries and resources for teaching or studying Ligeia.