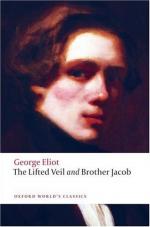 In the following essay, Carroll describes the important character of Latimer as a masochist attempting to change by going "into the sadism" that dominates him.

Give me no light, great Heaven, but such as turns To energy of human fellowship; No powers beyond the growing heritage That makes completer manhood.

Through her altruistic epigraph to a painful story, George Eliot suggests that the journey to greater human fellowship often requires a passage through suffering. In The Lifted Veil, Eliot explores the form of pain that shackles sado-masochistic relationships, and the roots of that pain—buried in the misperception that punishment is deserved. This paper will explore Latimer's attempt to change by moving through his masochistic stance into the sadism which has bound him.

The masochistic need for the sadist is captured by Eliot when she has Latimer moan:

While the heart beats, bruise it— it...