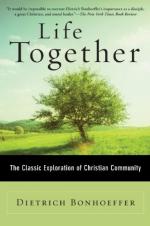 Life Together: The Classic Exploration of Faith in Community Summary & Study Guide

Dietrich Bonhoeffer
This Study Guide consists of approximately 39 pages of chapter summaries, quotes, character analysis, themes, and more - everything you need to sharpen your knowledge of Life Together.

Life Together: The Classic Exploration of Faith in Community Summary & Study Guide Description

Life Together: The Classic Exploration of Faith in Community Summary & Study Guide includes comprehensive information and analysis to help you understand the book. This study guide contains the following sections:

This detailed literature summary also contains Topics for Discussion and a Free Quiz on Life Together: The Classic Exploration of Faith in Community by Dietrich Bonhoeffer.

Dietrich Bonhoeffer receives a call in 1935 to take charge of an illegal, secret seminary for the training of young pastors in Finkenwalde, Germany. He is living in England at the time to avoid continuing conflict as a Christian pastor and theologian with his homeland Germany's Nazi government. He previously broadcasts public criticism of the German people in 1933 for following their leader Hitler. Risking severe persecution, he accepts the position and returns to Germany in 1935. Bonhoeffer becomes the director of the seminary, leading the seminarians in life together as a Christian community of fellowship. The common life they share provides the spiritual content and context for Life Together, which is the English translation of the German text Gemeinsames Leben, written in 1938. This non-fiction account occurs within the historical context of Nazi Germany from 1935 to 1945. The narrative is an illustration of spiritual life in the illegal secret Protestant seminary. Plot of the storyline describes Christian practices, beliefs and principles by which Bonhoeffer leads the seminarians in daily life together. Content of the work is a guide to the daily spiritual devotions of the seminary's community life.

Throughout this one hundred and twenty-two page non-fiction work, Bonhoeffer proclaims his theology and philosophy as a Christian. He describes and supports with numerous Scriptural quotes how a Christian community of fellowship lives a spiritual life together. Bonhoeffer's writing is a statement of his beliefs as a Christian. A non-Christian or even a Christian with moderate knowledge of theology and the Bible may find some of the author's claims unbelievable and difficult to understand or accept. There is no storyline action or any significant interaction among the characters. This book outlines a day's schedule of planned spiritual practices in a Christian community. The day begins with religious devotions in common, progresses through other activities both shared and alone, and ends with evening devotions. The author's fundamental goal is to describe the spiritual values and meaning of life together in Christ that the community shares. Quotes and prayers from the Old and New Testament and Book of Psalms, among other sources, are included within the text.

Bonhoeffer describes the community beginning its day with prayer, meditation, scripture readings and song. Details explain the spiritual significance of devotions the fellowship follows to commune with God. Breakfast together is an opportunity to appreciate the spiritual sense of daily bread and work. Evening devotions brings the community back to its common spiritual life together. After writing two additional books that present his fundamental beliefs, the government forbids Bonhoeffer from further writing or publishing. Hitler's police force, the Gestapo, eventually closes the seminary. In 1939, Bonhoeffer becomes involved in secret plans to overthrow Hitler. He believes that his fundamental requirement as a Christian does not allow him to retreat in pacifism from this political and military conflict. However, in 1945 Hitler's Nazi government hangs Bonhoeffer for his rebellion. His belief in Christ's call to come and die is confirmed by his death as a martyr.

Life Together: The Classic Exploration of Faith in Community from BookRags. (c)2022 BookRags, Inc. All rights reserved.