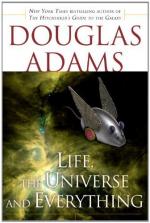 Life, the Universe and Everything Setting & Symbolism

Douglas Adams
This Study Guide consists of approximately 31 pages of chapter summaries, quotes, character analysis, themes, and more - everything you need to sharpen your knowledge of Life, the Universe and Everything.

This is a famous sport field in England where important cricket matches are held. It is the scene of the theft of the ashes trophy by the Krikkit robots, and also plays in the final scene where Arthur Dent nearly destroys and then saves the universe.

This is a space ship piloted by Slartibartfast which is navigated by an odd branch of mathematics called "bistromathics." The ship is shaped and decorated like an Italian bistro.

This is a fictitious branch of mathematics based on the observation that numbers written down on a waiter's order pad do not conform with the normal rules of math.

This is a grassy, peaceful planet with a permanent dust cloud that shields the inhabitants from seeing the galaxy around their planet. The people of Krikkitm unaware that anything exists outside their planet, decide to destroy...

More summaries and resources for teaching or studying Life, the Universe and Everything.

Life, the Universe and Everything from BookRags. (c)2022 BookRags, Inc. All rights reserved.