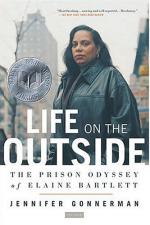 Life on the Outside: The Prison Odyssey of Elaine Bartlett Summary & Study Guide

Life on the Outside: The Prison Odyssey of Elaine Bartlett Summary & Study Guide Description

Life on the Outside: The Prison Odyssey of Elaine Bartlett Summary & Study Guide includes comprehensive information and analysis to help you understand the book. This study guide contains the following sections:

This detailed literature summary also contains Topics for Discussion and a Free Quiz on Life on the Outside: The Prison Odyssey of Elaine Bartlett by Jennifer Gonnerman.

The Rockefeller laws set the scene for this novel. Once in effect, these laws stipulated minimum mandatory sentences for capital drug crimes. It does not matter that Elaine Bartlett has no prior arrests. She receives a harsh sentence (one that some people call cruel and unusual compared to other criminals serving half of Elaine's sentence for murder or rape). This story shows how incarceration reaches beyond prison bars and into the homes of the innocent victims left behind.

Elaine Bartlett spends sixteen years incarcerated for her first offense, a drug charge for carrying from Manhattan to Albany, New York. She had never been arrested for anything prior to this. Others arrested for drug related charges receive three year sentences, yet she gets twenty-years to life. Her boyfriend, Nathan receives twenty-five years to life and didn't even carry the drugs. Elaine's four children are left to be raised by her mother, Yvonne.

Lacking a good upbringing herself, Elaine carries a bag of cocaine from Manhattan to Albany to make $2,500. This money will be used to buy Thanksgiving dinner for her family. She does not realize she is being set up and carries just enough cocaine to constitute an A-1 felony (minimum fifteen years to life) according to the Rockefeller drug laws passed in the 1970's.

Elaine, not knowing any better, decides to go to trial and turns down an offer from the state attorney for five years. She does not know about the Rockefeller drug laws, nor of anyone who serving more than three years for a drug-related charge. She talks Nathan into doing the same thing.

To her and Nathan's surprise, she is sentenced to twenty years to life and he receives twenty-five years to life. Shocked and dismayed she serves her time until finally a clemency is granted to her after sixteen years. What she discovers are years of damage that have taken their toll on her young family during her years of incarceration.

Her mother struggles to raise her four children, along with her other children and grandchildren. The tiny apartment holds thirteen people surviving on Yvonne's welfare checks. Their struggles are hidden every visit to the prison to see Elaine, because they don't want to add to her grief on the inside.

Upon Elaine's release she unwittingly anticipates picking up right where she left off, but years-worth of resentment from her own sisters and her two daughters unfolds and seems to get worse with every day. Elaine's life on the outside starts feeling like another prison. It takes her months to get a job and trying to keep it while living in the tiny, filthy apartment is no easy task.

Through the years, Elaine loses one brother to AIDS, another is stabbed and dies in the hospital, her mother has a heart attack and dies and her other siblings are falling apart. This is the only family that Elaine's children have, so it affects them deeply as well, creating a non-stop cycle of grief and misfortune.

Elaine does the best she can, struggling each day to put the pieces back together. She grows stronger with each day and each accomplishment, no matter how small. She does end up getting her own apartment and her children build new relationships with her. They are not the relationships Elaine had dreamed of, but they are real.

Life on the Outside: The Prison Odyssey of Elaine Bartlett from BookRags. (c)2022 BookRags, Inc. All rights reserved.