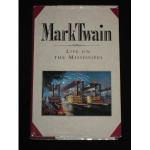 Mark Twain
This Study Guide consists of approximately 19 pages of chapter summaries, quotes, character analysis, themes, and more - everything you need to sharpen your knowledge of Life on the Mississippi.

Life on the Mississippi Summary & Study Guide includes comprehensive information and analysis to help you understand the book. This study guide contains the following sections:

This detailed literature summary also contains Topics for Discussion and a Free Quiz on Life on the Mississippi by Mark Twain.

In Mark Twain's Life on the Mississippi, the author describes many different aspects of the river and its life in the nineteenth century. Overall, Twain writes about the Mississippi as a living, breathing being - it is by far the most important character in the story, and functions as a character throughout the narrative.

Half history and half memoir, Life on the Mississippi begins with an historical examination of the river. Twain writes of its early discovery by settlers and how, for many years, the river was ignored as anything but a simple natural fact: it was hardly used, and very few pilgrims came to live along it. However, it became an important feature as America expanded westward, and was of vital importance in trade and travel by the time Twain was born.

After covering the history of the river, Twain focuses on his personal history with the river. Growing up in Missouri, the river played an important role in his childhood, as he dreamed of becoming a steamboat pilot. Eventually, he achieved this role: a large part of the book deals with his training in this area, under the tutelage of an experienced pilot named Bixby. Twain's stories vary throughout the narrative: at certain points, he is humorous, particularly when he's speaking about his own failings in the early days; at others, he is technical, describing the various features of the river and the difficulties they presented for pilots in the early days; at other points, he describes tragic occurrences, such as the death of his brother.

Twain then marks the passage of twenty-one years when he was not on the river with a single page, then transitioning back to the river itself. However, this time he writes of a recent journey he took down the river, incognito, more than two decades after he worked as a pilot himself on the Mississippi. Here, he searches for different towns he knew, speaks to pilots old and new, and looks at the changes that have taken place on the river since he last saw it.

Throughout the book, Twain relies not only on his own recollections and observations, but also on a variety of sources: from his own early drafts of "The Adventures of Huckleberry Finn" to the memoirs of previous travelers, such as an English writer named Mrs. Trollope. By doing so, he creates a textured narrative about an important, changing geographical feature that has played a complex role in American history.

More summaries and resources for teaching or studying Life on the Mississippi.

Life on the Mississippi from BookRags. (c)2022 BookRags, Inc. All rights reserved.