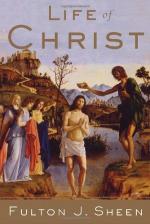 Life of Christ Topics for Discussion

How is Christ distinguished from other religious teachers according to the author?

For what reason did Christ come to Earth?

Sheen sees many similarities between Peter and Judas, except that Peter repented after his sin, while Judas merely felt remorse. What distinction is being made here?

What is the relationship between the Virgin Mary and Christians?

What were the motives which drove Pilate's actions during the trial of Jesus?

Explain Christ's teaching on celibacy and voluntary poverty. How can they be simultaneously good but not required of Christians? What does Christ mean when he says some are "appointed" to make these sacrifices?

Christ said that his teachings would not be understood unless he died and rose from the dead. Why is this so?

Explain the political situation in Judea which made the temple authorities eager to have Christ crucified.

Christ often compared himself to...