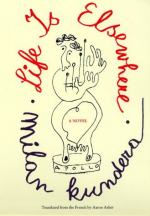 Milan Kundera
This Study Guide consists of approximately 44 pages of chapter summaries, quotes, character analysis, themes, and more - everything you need to sharpen your knowledge of Life Is Elsewhere.

This detailed literature summary also contains Topics for Discussion and a Free Quiz on Life Is Elsewhere by Milan Kundera.

The poet's mother gets pregnant by a young engineer, and to her shock, the engineer wants her to have an abortion. The poet's mother refuses and instead has her parents make the engineer marry her. The mother imagines that she conceived of the poet by way of Apollo, and names him Jaromil, a name in Czech almost as exalted as Apollo. Jaromil grows up a spoiled child, not only because of his mother's family's wealth, but because he is mother-dominated. Though Jaromil is picked on, he becomes boyhood friends with the janitor's son, who helps Jaromil beat-up and torture another boy. This is a foreshadowing of the relationship between Jaromil and his friend later in life.

Jaromil's father is not in love with Maman anymore and is gone more and more from the family. When Jaromil is about 13, he becomes a student of the artist, who fills him with surrealistic ideas about art and poetry. At this time Jaromil draws pictures such as dog-people and headless women, but later Jaromil concentrates on poetry. Maman becomes involved in a sexual affair with the artist. This ends when Maman is exhausted by the artist's intellectual theories, and humiliated by his painting on her nude body. Later as he grows older, Jaromil goes through a struggle to win girls. He cannot go through with having sex with his university girlfriend. Jaromil's second girlfriend, the red-headed girl gets Jaromil to have sex with her, but later Jaromil is upset because of her obvious sexual experience. The Communists come to power in Czechoslovakia, and Jaromil readily decides to back the new revolution and its ideals of poetry. He drops his surrealist style of poetry and adopts rhyme and rhythm to his poems. Jaromil takes up the themes of the debating Communist, and the socialist worker who makes his production quota.

A big change occurs in Jaromil when the janitor's son seeks Jaromil. Jaromil finds out that the janitor's son is now a police official who interrogates and tortures prisoners. This makes Jaromil think of him as a real man. The janitor's son invites Jaromil to a police poetry night. Jaromil recites there, along with his former idol, a grey-haired poet. The two men and others get taken home to a beautiful filmmaker girl's flat, where Jaromil turns down a chance for sex with the girl. Jaromil protests virtue, but his real reason is his lousy underwear. Jaromil gets into a fight with his red-headed girlfriend who is late to meet him. She claims she was talking to her brother who wants to flee abroad. Jaromil decides to tell the police about this and both the girl and her brother are arrested. There is a chapter in the book that tells of the redhead girl meeting with her middle-aged lover after Jaromil's death. She made up the story of her brother's problems when she is late from seeing her middle-aged lover.

Jaromil is invited to a party of the filmmaker girl, and thinks he has a chance to win her. He is sick and does not realize that he is courting death as other lyrical poets did, like Lermentov. A man verbally attacks Jaromil at the party for abandoning his artist friend, and producing horrible poems. Jaromil defends himself as representing progress, and says that the man and the artist are dead. The man challenges Jaromil to a fight, and picks up Jaromil and throws him on a cold terrace. Jaromil is mortified and stays there for hours. Jaromil finally goes home, but catches pneumonia and dies.

More summaries and resources for teaching or studying Life Is Elsewhere.