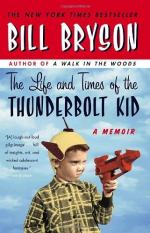 The Life and Times of the Thunderbolt Kid - Chapter 4, The Age of Excitement Summary & Analysis

Chapter 4, The Age of Excitement Summary and Analysis

Everything seemed better in the 1950s and people felt indestructible. Kids didn't wear helmets when riding bikes or seat belts in the car. All foods were good for people and every week brought news of something else that would just make life better. The military began testing atomic bombs in Nevada, which soon became a tourist attraction so people could feel the shake of the earth and see the mushroom cloud.

Television became the joy of the 1950s. Along with the television came TV dinners, created by C.A. Swanson and Sons. Television programs were different than today as well. Back then, commercials were built right into the show so the characters would pause during a conversation for an announcer to give the commercial.

The only thing that came close to the fascination...

(read more from the Chapter 4, The Age of Excitement Summary)

The Life and Times of the Thunderbolt Kid from BookRags. (c)2023 BookRags, Inc. All rights reserved.