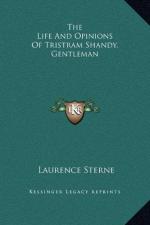 The Life and Opinions of Tristram Shandy Summary & Study Guide

Laurence Sterne
This Study Guide consists of approximately 31 pages of chapter summaries, quotes, character analysis, themes, and more - everything you need to sharpen your knowledge of The Life and Opinions of Tristram Shandy.

The Life and Opinions of Tristram Shandy Summary & Study Guide includes comprehensive information and analysis to help you understand the book. This study guide contains the following sections:

This detailed literature summary also contains Topics for Discussion and a Free Quiz on The Life and Opinions of Tristram Shandy by Laurence Sterne.

The Life and Opinions of Tristram Shandy promises the life story of the fictional Tristram Shandy, but over nine volumes and with a number of digressions and narratives, the reader learns more about his family, and in particular his Uncle Toby and his father, than Tristram. The main characters swap such fanciful opinions and adventures that by the end, Tristram labels his epic story cock and bull.

The first volume begins with the conception of Tristram. His mother spoils the moment by asking his father if he has wound the cuckoo clock. The remainder of the chapter introduces all the main characters that take part in his birth, and characters from some of the stories he promises to tell later. He introduces the mid-wife, Dr. Slop, the parson, Yorick, Tristram's faithful servant, Eugenuis, Uncle Toby and of course his own mother and father. However, through many digressions that have no real relevance to Tristram's birth, he never quite gets to the moment of his birth.

The second volume begins a tale about how his Uncle Toby sustained a groin injury in battle, and his subsequent recovery at Shandy Hall. Finally, he gets to the day of his birth where his father and uncle chat in the parlor. Tristram's mother is upstairs in labor, with the servant Susannah and the mid-wife in attendance. Tristram's father decides that Dr Slop should also to be present, so he tells his servant Obadiah to fetch him. When the Doctor arrives, the men continue their philosophical discussions; however, the Doctor has not brought his medicine bag, so Tristram's father sends Obadiah to fetch it.

In the third volume, Dr Slop practices using his forceps on Toby's hand and takes Toby's skin off. This causes great concern for Tristram's father, but before he can voice his concerns, Susannah comes down to request Dr Slop's assistance. The Doctor leaves and Toby and Tristram's father fall asleep. Toby's servant, Trim, wakes them up when oiling the hinges of the parlor door. They ask what the noise is from the kitchen and Trim explains Tristram's nose has been damaged by the doctor's forceps, so the doctor is making a new nose bridge. Tristram's father is distraught and gives a lengthy lecture on the importance of noses.

The fourth volume begins with a tale by the nose scholar Swalkenburguis. However, this story is merely a digression. Upon its completion, we return to the Parlor where Tristram's father decides he must give his son a strong name. Susannah runs downstairs to say that the baby may not live, and the curator wants to baptize the child immediately. Tristram's father tells Susannah the child's name is Trismegistus. Unfortunately, when she relays this information upstairs, she gets the name wrong and they call the child Tristram. Tristram's father asks Yorick if he can change the child's name. Yorick refers him to the church lawyer, who tells him they have to keep the name Tristram. Upon arriving home from the meeting, Tristram's father finds his aunt has left him a sum of money. Just as he is thinking of using the money to pay for his eldest son Bobby's trip to Europe, he receives news that Bobby is dead.

The fifth volume looks at the household's reaction to Bobby's death. Firstly Tristram details his father's reaction as he speaks to Toby and then Tristram looks at the servants' reactions in the kitchen. In wake of Bobby's death, Tristram's father decides to concentrate on Tristram's education, so he begins to write a book detailing how to teach his younger son. Unfortunately, Tristram's father neglects Tristram's education because the father is too busy writing the book. When Tristram is five, a falling sash window circumcises him. Susannah, who is with Tristram, flees from the scene, but it turns that the falling window is Trim and Toby's fault.

In the sixth volume, Tristram's father is talking to Toby about finding a governor to educate Tristram. Toby suggests his adopted son Le Fever. Tristram then recounts the tale of how Toby met Le Fever's dying father and became Le Fever's guardian. Tristram tells us the war with France has finished and with it his Uncle Toby's hobby of recreating his battle scenes. Tristram explains his Uncle's boredom leads him into an affair with his next-door neighbor, the Widow Wadham.

In the seventh volume, Tristram thinks he is dying. Upon consultation with Eugenuis, he decides the only way he can outrun death is by traveling through Europe. Tristram heads off to France and travels to Paris, Bologne, Lyon and finally to the southern parts. It is only when he is in Southern France that he feel he has defeated death.

In the eighth volume, Tristram details the beginning of Toby's affair with the Widow Wadham. During the refurbishing of Toby's house, he stays at the Widow's place next door. Over the course of three days, the widow falls in love with him and tries to work her way into Toby's affections. However, it is not until the end of the war that Toby returns the love. Once Toby realizes he is in love, he concocts a plan with Trim to win her over. Tristram's father writes Toby a letter detailing how to act with ladies, delivering it just as Toby is about to visit the Widow.

In the final volume, Tristram follows his Uncle into the Widow's house. The Widow is anxious about Toby's groin injury and whether it is has left him impotent. After a misunderstanding, Toby assures her he is fine. Meanwhile, Trim wins over the affections of the Widow's servant, Bridgett.

More summaries and resources for teaching or studying The Life and Opinions of Tristram Shandy.

The Life and Opinions of Tristram Shandy from BookRags. (c)2022 BookRags, Inc. All rights reserved.