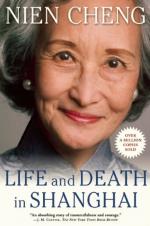 Life and Death in Shanghai Summary & Study Guide includes comprehensive information and analysis to help you understand the book. This study guide contains the following sections:

This detailed literature summary also contains Topics for Discussion and a Free Quiz on Life and Death in Shanghai by Nien Cheng.

The novel is an autobiography of Nien Cheng, depicting her life during the Cultural Revolution in China. Cheng begins her story from the time right before the Cultural Revolution begins and ends with her relocation to the United States many decades later, including her compelling account of the six and a half years she spent in a detention house under false imprisonment.

In the beginning of the autobiography, Cheng discusses her life and former management position at Shell Oil while in Shanghai. She gives great detail on her life, home, activities and family, including her daughter Meiping and deceased husband. She is surrounded by beauty and manages to live a privileged lifestyle among things that are considered "Western" or American or British in influence. When the Cultural Revolution begins, Cheng is not terribly worried since the political movements initiated by Mao Zedong are frequent occurrences and typically end as quickly as they begin. However, the political situation gathers with intensity and Cheng's life is irrevocably changed when Red Guards come to her home to destroy it one morning. She is attacked for being a "capitalist" and a friend of foreign countries and a spy against China. Under these charges, she is eventually brought to No. 1 Detention House for imprisonment that will last for six and a half years.

For the entire time that Cheng is imprisoned in the Detention House, she endures incredible punishments and psychological torments. She frequently ends up in the hospital and has illnesses due to the lack of nutrition and poor conditions, including extremely cold temperatures. Throughout these situations, she is brought before various interrogators who threaten her when she does not confess to imagined crimes or absurd charges against her. She keeps her wit and remains strong through various physical and mental exercises that she gives herself to stay sharp and alert.

Cheng is finally released thanks to a change in the political situation. However, even to the end of her imprisonment, Cheng denies any wrongdoing and even refuses to leave the detention house until a full retraction of her false imprisonment is printed in the newspaper. Once she is forced to leave, her daughter does not greet her at the door. Cheng immediately realizes that her daughter has died. Cheng's goddaughter tells her that Meiping committed suicide during Cheng's imprisonment and the second half of Cheng's life begins. Although she is released from prison, Cheng works relentlessly to find out what really happened to her daughter while adjusting to the new life outside the detention house and in China after the Cultural Revolution. After the truth of Meiping's death is revealed, Cheng makes plans to leave China for good and settle in the United States. She obtains a passport by telling Chinese authorities that she is going to America for a family reunion with her two sisters that live there.

She settles into the United States and resumes a peaceful life there. However, throughout her time of imprisonment, Cheng's sense of justice remains strong despite all that has happened to her. She ends by leaving China and saying how strong her love for the country is and how hard she tried to make the area her home, even if she did fail through no fault of her own.

Life and Death in Shanghai from BookRags. (c)2022 BookRags, Inc. All rights reserved.