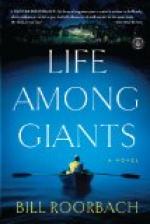 Bill Roorbach
This Study Guide consists of approximately 19 pages of chapter summaries, quotes, character analysis, themes, and more - everything you need to sharpen your knowledge of Life Among Giants: A Novel.

Life Among Giants: A Novel Summary & Study Guide includes comprehensive information and analysis to help you understand the book. This study guide contains the following sections:

This detailed literature summary also contains Topics for Discussion on Life Among Giants: A Novel by Bill Roorbach.

"Life Among Giants" is a novel by Bill Roorbach about the murder of David "Lizard" Hochmeyer's parents, and his determination to get in his life in order and find the killers.

When the novel begins, Lizard and his sister, Katy, have a seemingly idyllic life in Connecticut. They live with their mother and father, who are, by all appearances, normal parents. But one day, Lizard and Katy's father is arrested by the FBI, for it turns out he has been working for a fraudulent company run by Perdhomme, who carries out his operations with mafia-like efficiency. When Lizard's father decides to go state witness, he is ruthlessly murdered by an unknown assailant, as is Lizard's mother.

Lizard spends the next years of his life going to college and playing football for the Miami Dolphins, all the while keeping in touch with Katy. Lizard ultimately opens a restaurant with two teammates, and later moves back to Connecticut to start a new restaurant. There, he falls back in touch with Sylphide, famous and wealthy Norwegian ballerina, who has her own dance company following the death of her rock star husband, Dabney. She lives across a pond between her and Lizard's houses. Lizard, meanwhile, is determined to find his father's killers, and figures out that Perdhomme, and Dabney's brother, are behind the murder. They were seeking to exploit Dabney's wealth, and when it fell into Sylphide's hands, to exploit her wealth.

Using his culinary skills and poisonous mushrooms, Lizard crafts dinner for Sylphide, Perdhomme, and Dabney's brother, Brady. All three ultimately die - Sylphide having knowingly consumed poisonous food. Sylphide leaves everything to Lizard, who manages her estate, her arts foundation, and her dance company. Katy later dies when she drowns herself.

More summaries and resources for teaching or studying Life Among Giants: A Novel.

Life Among Giants: A Novel from Gale. ©2005-2006 Thomson Gale, a part of the Thomson Corporation. All rights reserved.